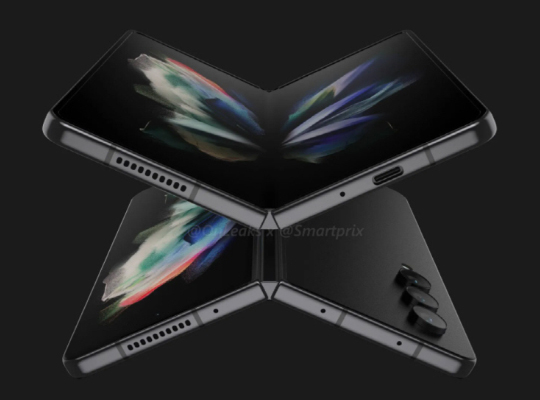 Samsung Electronics Co.‘s much anticipated Galaxy Z Fold 4 due out in August, is expected to sport bigger display when unfolded for more square-like full look with easing in heating issue and chic color choice, according to leaks by various IT tipsters.

Steve H. McFly aka OnLeaks, an often reliable source of IT leaks, published via IT media Smartprix on Wednesday high-resolution renders and a 350-degree video of a black Z Fold 4.

The overall design is similar to its predecessor, the Z Fold 3, but the dimensions have been slightly altered. The leaks show that the Z Fold 4 measures 155×130×7.1 mm against its predecessor’s 158.2×128.1×6.4 mm when unfolded for a more square-like look.

OnLeaks is claiming that the thickness will grow by 0.7 mm while Ice Universe, another reputable tech leaker, projects the Z Fold 4 will be the slimmest foldable phone yet. The thinner design is thus unlikely to accommodate the S Pen.

Another leak from Ice Universe asserts that the Z Fold 4’s aspect ratio has gone from 24.5:9 to 23:9 for the external screen ratio and 5:4 to 6:5 for the interior screen compared to the Z Fold 3. The aspect ratio suggests that the resulting shape is closer to a square when unfolded.

The inner display is said to flaunt a high refresh OLED panel like the Galaxy S22 Ultra, while the under-display camera is an improved version of the Z Fold 3.

The rear camera module contains three protruded lenses without support much like the camera design of the Galaxy S22 Ultra.

According to Ice Universe, the Z Fold 4 is powered by Qualcomm`s unreleased Snapdragon 8 Gen 1 Plus chipset. This chipset is faster, more power-efficient, and has a more stable thermal performance.

The Galaxy Z Fold 4 will have a battery capacity of 4,400 mAh and a maximum charging speed of 25W, identical to the Z Fold 3.

The Galaxy Z Fold 4 is expected to be available in beige, black, and gray.