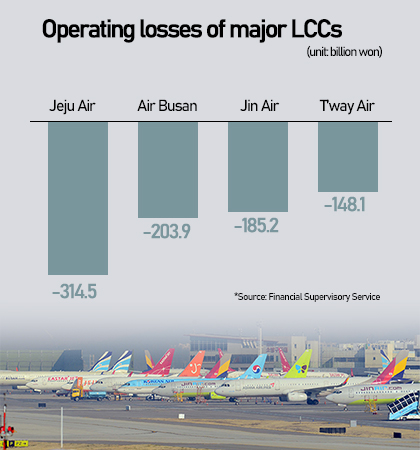 이미지 확대
South Korean low-cost carriers still mostly grounded in international flights fret they may not be in sound condition by the time international travel is fully normalized as they are on the brink of losing state relief funding.

According to industry sources on Wednesday, the six-month state program to help the aviation industry sustain payroll and a cut in airport usage fees with subsidies is due to expire in end-June. Whether to extend the program will be decided during a council meeting by the Ministry of Employment and Labor.

Most airliners cannot expect further extension of the subsidies they have taken since 2020 as the ministry is pushing ahead with the gradual recovery of the operation of international flights.

In April, passengers traveling on international routes soared more than 50 percent from a month ago. But the surge is largely due to the base effect and long-haul routes operated by larger full-service carriers Korean Air Lines Co. and Asiana Airlines Inc, according to LCCs.

The country’s top four budget airliners Jeju Air, T’way Air, Jin Air and Air Busan serviced 8,400,788 passengers on Jan 1-May 10, 2019, and the number plunged to 58,476 a year later due to the onset of the pandemic. During the same period this year, international travels using their flights jumped 50.2 percent from last year but the number still is equivalent to a mere 1 percent of the 2019 level.

LCCs earned nearly 80 percent of their revenue from international services before the pandemic outbreak, of which 40 percent came from flights to Japan and China. Travel for tourism in Japan and China, however, remain banned due to the virus spread.

Korean Air last year was funded 142.9 billion won in state employment subsidy. Jeju Air, the largest LCC in Korea, received one seventh of the amount, 20 billion won. If the government subsidy will sunset as planned, LCCs will have to start unpaid furlough for employees, they say.

By Moon Gwang-min and Lee Ha-yeon