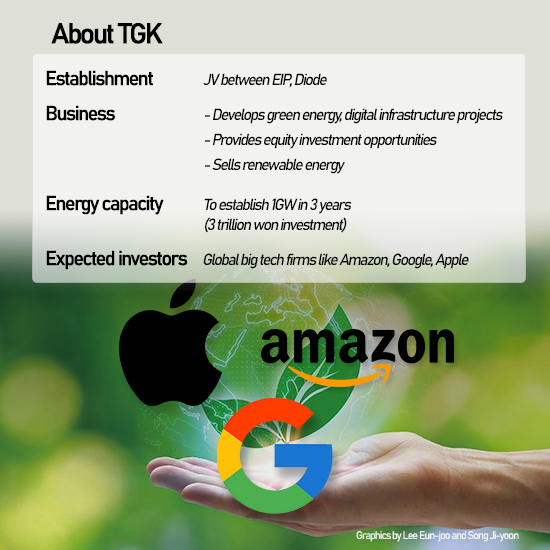 According to multiple sources from the investment bank industry on Wednesday, EIP has launched joint venture The Green Korea (TGK) with U.S. energy infrastructure project developer and investor Diode Ventures.

TGK is a financial platform company that will offer green energy and digital infrastructure projects in which multinational tech companies can take part. TGK plans to set up separate subsidiaries for each renewable energy – solar and wind power – generation business and data center business on expectations that global technology companies, currently major buyers of renewable energy in the world, would invest in the subsidiaries and purchase locally sourced green energy.

TGK’s business model lies on RE100, a global initiative that promotes influential businesses across the world to voluntarily commit to converting their electricity use into 100 percent renewable energy until 2050. They can also reach RE100 goal by purchasing renewable energy certificates (RECs) for fossil fuel uses.

According to Climate Group, more than 340 companies have joined the RE100 initiative as of Wednesday. Some big companies have also requested suppliers to take part in the move to apply RE100 to entire supply network.

It also aims to secure investment of up to 20 percent stake in each green energy and data center subsidiaries from global companies. One of the global big tech firms is known to be in talks with the company for investment in one of the subsidiaries. TGK plans to receive additional investment letters from other global players by March.

Diode Ventures is a subsidiary of engineering company A Black & Veatch Company whose clients in its energy infrastructure project development and investment operation are Google, Meta, and Amazon.

“TGK can be a new business model for large companies at home and abroad to reach ESG target,” said Park Hee-jun, president of EIP. “It will be a win-win model in which companies are able to realize their carbon neutral goal through TGK’s development platform.”