이미지 확대
Samsung Electronics Co. is expected to pass 300 trillion won ($252 billion) milestone in sales this year, commanding as the world’s top chipmaker and joining a select group of multinational manufacturers capable of such shipment.

According to local financial data tracker FnGuide on Tuesday, Samsung Electronics is estimated to earn an operating profit of 58.06 trillion won ($48.8 billion) this year, gaining 12.6 percent from a year ago, with sales up 9.6 percent to 305.9 trillion won.

Profit is close to its peak of 58.89 trillion won in 2018 super chip cycle and sales at fresh high after last year’s record. Only Apple, Volkswagen and Toyota earn more than $250 billion in revenue.

“Softening in memory prices will be restricted in the first half of this year due to rising demand for memory chips from hyper-scale cloud and IT companies,” said Lee Su-bin, an analyst at Daishin Securities. Lee revised up the outlook for Samsung Electronics’ operating profit from memory chip business this year to 34 trillion won, much higher than the estimate of 29 trillion won for last year.

Daishin Securities expected Samsung Electronics would be able to post an operating profit of 61.97 trillion won on sales of 309.67 trillion won in 2022.

“Its stock price is expected to benefit from strong performance in memory and foundry business,” said Park Yu-ak, an analyst at Kiwoom Securities.

Choi Do-yeon, an analyst at Shinhan Investment, also expected business improvement, projecting “gains in DRAM and NAND prices in the second quarter amid stable demand for server memory chips and a recovery in supply situation.” 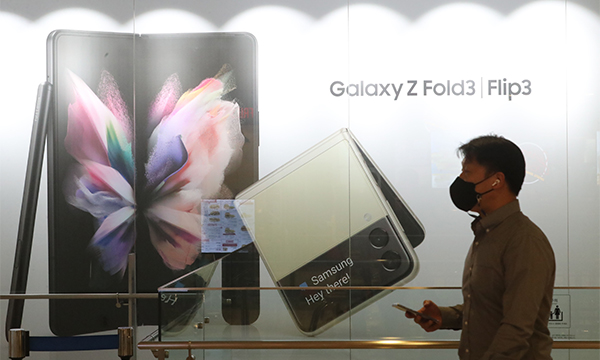 The South Korean tech giant this year is forecast to sell an estimated 12-13 million units of the foldables, taking up 74 percent in the global category, according to market research firm Counterpoint Research. Newest series Galaxy Z Fold 4 and Z Flip 4 are due to be released in the third quarter of the year, and Galaxy S22 next month.

“Thanks to robust sales of Galaxy S22 and Galaxy S21 FE smartphones, the mobile device division Samsung Electronics is estimated to earn 4.5 trillion won in operating profit in the first quarter, adding about 200 billion won from the previous year,” said Park.

Samsung Electronics is believed to have toppled Intel as global No. 1 in chipmaking.

Samsung Electronics’ revenue from January to September last year exceeded that of Intel, which had dominated the $400 billion semiconductor industry for the past 30 years.