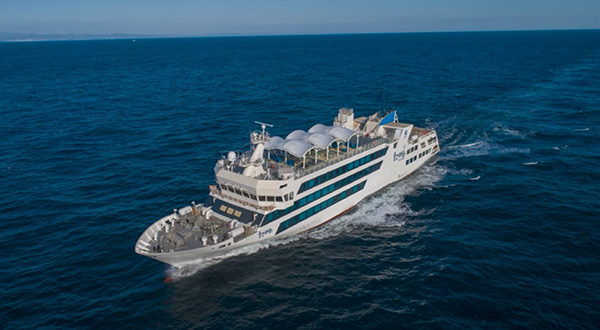 South Korea’s top shipbuilding conglomerate Hyundai Heavy Industries Group has succeeded in applying the electric propulsion solution for ships that it has developed to a commercial vessel, helping the shipping industry move a step closer to meeting its target to halve carbon emissions by 2050.

The technology can use both engine and batteries as propulsion power. Depending on the situation, it can be operated only with the engine or battery or both at the same time. Ships equipped with such an electric propulsion solution emit 40 percent less carbon dioxide than conventional vessels. This is expected to provide opportunity for Hyundai Heavy Industries Group to strengthen its position in the eco-friendly ship market.

The group held a naming ceremony on Tuesday for an electric-powered vessel fitted with its propulsion solution at Hyundai Mipo Dockyard Co. in Ulsan, South Korea. The electric propulsion solution powering the vessel is equipped with a dual fuel engine that can use both electricity and liquefied natural gas as fuel and an energy storage system.

Two trial tests of this ship showed that CO2 emissions were reduced by 40 percent during sailing while fuel efficiency increased by 6 percent compared with other conventional ships. The CO2 reduction is equivalent to emissions from 100 cars.

With this propulsion solution, the vessel can be operated by switching between three modes ? zero emission propulsion by using batteries, general sailing propelled by the engine and boosting use of both engine and batteries.

By Oh Soo-hyun and Kyunghee Park