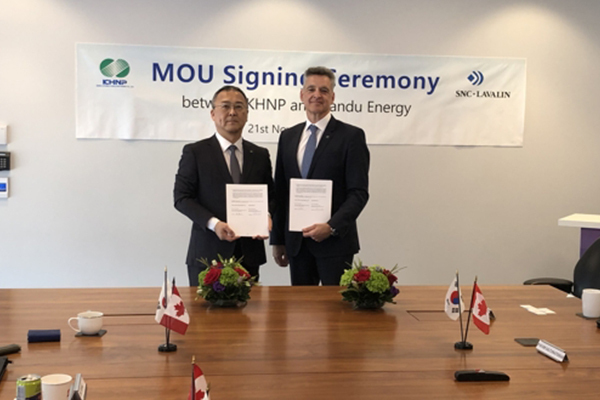 MOU between KHNP and Candu Energy [Provided by KHNP]

KHNP and Candu Energy will share technology and information on reactor decommissioning including treatment of hazardous radioactive waste, said KHNP on Tuesday. The two firms signed a memorandum of understanding on Monday (local time in Canada).

KHNP has teamed up with Candu Energy to safely retire the Wolsong 1 nuclear power plant, South Korea’s second-oldest reactor that started commercial operation in 1983. Its permanent shutdown was approved in late 2019.

KHNP plans to immediately dismantle Wolsong 1 instead of a lengthy procedure.

When decommissioning a heavy-water nuclear reactor like Wolsong 1, reactor usually is left shut down for more than 60 years to have radiation fall to a certain level. Wolsong 1 would be the first heavy-water reactor to be immediately decommissioned.