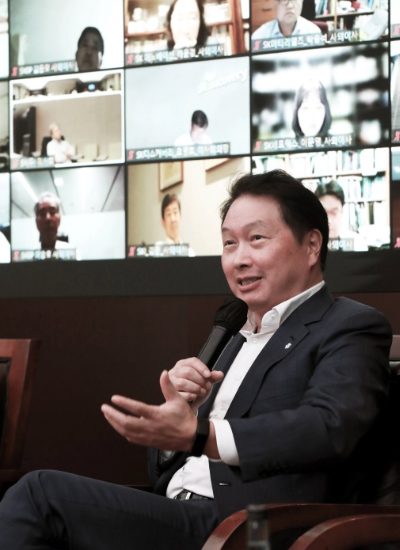 SK Group will bolster the role of its board directors in keeping management in check for a sweeping governance reform under the global-wide environmental, social and governance (ESG) initiative.

Under the group-wide governance reform, major units including holding entity SK Inc. will establish an HR committee and an ESG committee under which each board will decide major agendas like CEO appraisal, payment for inside directors, mid- to long-term growth strategy and investment from the end of this year.

The recent workshops were designed to muster ideas to expand the board-led responsible management to the entire group affiliates and also speed up the change.

“Chey emphasized the importance of expanding the role of outside board directors acting on behalf of the management during the three-time intensive discussions,” said a group official.

SK Group’s recent management decisions show the increasing role of the board.

In the August board meeting, Chey and an outside director of SK Inc. voted against an overseas investment plan, but the agenda was approved with the others voting in favor. SKC’s investment agenda for a joint venture with a silicon anode materials supplier from the U.K. was voted down due to opposition from some of the directors.

Boards of major SK units also vowed to raise their voice to keep management in check. They are planning to introduce related training programs, explore appropriate candidates for outside directors with expertise, share management information and better communicate with the leadership.

Chey proposed to establish a communication platform for all board directors of group companies as well.

“Expanding the board role for SK Group’s governance reform is very encouraging. Whether it will lead the governance reform of other conglomerates in Korea remains to be seen,” said Kim Hwa-jin, professor at Seoul National University School of Law.