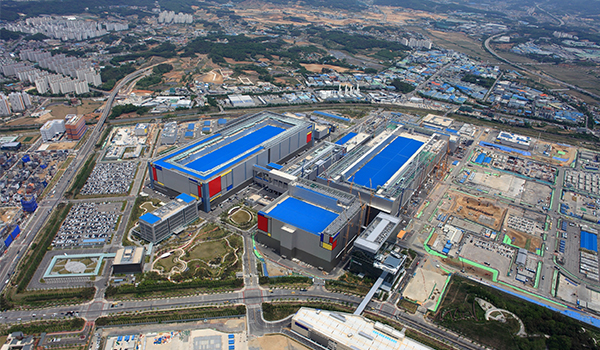 Samsung Electronics expects tripled output from its foundry by 2025 versus the founding year of 2017, generating more than 39 trillion won ($32.5 billion) in 2024 to narrow the gap with pure-play foundry leader TSMC of Taiwan which was behind more than half of global consignment chip supplies with consolidated revenue of $45.5 billion in 2020.

The mid-term business development plan was unveiled at Samsung Foundry Forum 2021 which was held virtually and privately on Oct. 6-8, according to industry sources on Tuesday.

It is the first time since 2017 that the Korean tech giant has disclosed the management status of its foundry business and its technology level in such detail.

Samsung did not elaborate on its wafer rollout, but it shared with the forum participants that its foundry facility size grew 1.8 times from 2017 and will grow three times in 2025 and 3.2 times in 2026.

To ramp up the facility, the company will kick off the construction of its second campus foundry line (S5) in Pyeongtaek as early as next year and a new plant overseas.

Samsung Electronics will soon announce its investment plan for a new plant in Texas and is also considering the expansion of production lines for legacy semiconductor chips for which demand is rising from various fields, Choi Siyoung, head of the company’s foundry business, said in a keynote lecture of the forum.

Samsung Electronics also aims to sharply increase the proportion of chips in sub-5 nm nodes from 13 percent of the total this year to 34.5 percent by 2026.

In addition, the proportion of high-performance semiconductors such as neural network processing unit (NPU), which is attracting attention as an artificial intelligence (AI) semiconductor, will be increased from 10 percent to 32 percent during the same period.

Samsung Electronics is expected to generate sales of 20 to 21 trillion won from its system semiconductor business that includes foundry services this year, and its annual growth target is 24 percent over the next three years.

Samsung held a global foundry market share of 17.3 percent in the second quarter of this year, still a stretch behind TSMC’s 52.9 percent, according to TrendForce’s latest data. Samsung also lags behind its Taiwanese rival in terms of employment of EUV (extreme ultraviolet) lithography equipment essential to churn out next-gen chips with the ratio of 24 percent versus 50 to 70 percent proportion at TSMC chip lines.

Samsung Electronics already vowed to overcome its market share gap with TSMC through its early adoption of gate all around (GAA) technology to its third-generation manufacturing process, while making strides in 5-nano processing.

The 5-nano or under processing makes up around 35 percent at Samsung foundry whereas the ratio is 65 percent at TSMC.