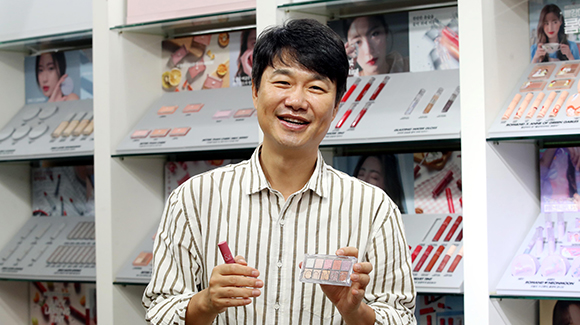 iFamilySC founded as full wedding planning service firm by a singer-turned-entrepreneur and wedded to a famous Korean actress has been in the limelight as his company is ready to join the Kosdaq market based on the budding beauty business riding on K-wave fandom.

“Our cosmetics brand Rom&nd has seen its sales zoom in three years of its launch thanks to the broad and loyal consumer base in many countries around the world who have turned into fans of our brand,” said Kim Tae-wook, CEO of iFamilySC during a recent interview with Maeil Business Newspaper. Kim was once a ‘90s star singer in Korea after he debuted in 1991 but later turned into a successful entrepreneur with wedding planning business. He is married to Chae Shi-ra, actress behind the first Korean wave generation with mega-hit TV drama Eyes of Dawn in the 1990s.

His company is preparing to float a total 978,000 shares at a price band of 39,000 won to 48,000 won on Korea’s secondary Kosdaq market on Oct. 28 on the back of the success of its cosmetics business. Samsung Securities is the sole book runner. Bookbuilding will take place on Oct.12-13, and retail subscription on Oct.18-19.

Its relatively new business Rom&nd has been making a splash in the cosmetics market at home and abroad. It generated 72 billion won ($ 60 million) in sales last year, up more than hundredfold from 700 million won in the first year of its launch. About 70 percent of its sales come from over 20 countries including China, Japan, Taiwan, Australia, Canada and the U.S.

Kim attributes the success of the cosmetics brand to the solid customer base it has established through its wedding consulting business iWedding and active communications through social media with consumers. Rom&nd launches new products keenly reflecting consumer tastes and demand. It launched 35 new products in the first half of this year on top of existing 136 products and more than 80 percent of which survive in the market for a long haul.

The company is planning to launch a new skincare brand next year targeting women in their 20s and 30s, Kim said.

The strong earnings track record of the company bodes well for its plan to go public on the Kosdaq market at the end of this month.

By Lee Jong-hwa and Lee Soo-min