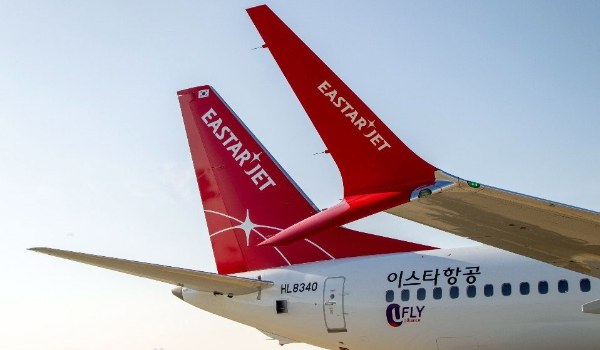 South Korean budget carrier Eastar Jet Co. under a new owner Sung Jung Co. will file its self-rescue scheme on Friday, readying to take off again early next year after a year-long hiatus.

Eastar Jet will submit to the Seoul Bankruptcy Court on Friday its rehabilitation plan including business normalization and debt repayment measures that requires approval from its major creditors later, a source at the company said.

Eastar Jet came under local property developer and golf course operator Sung Jung in June, which signed a contract with the budget carrier to acquire an 80 percent stake for 108.7 billion won.

Of the proceeds, 80 billion won will be used to pay up the entire priority claims including overdue wages and retirement pay owed to its employees, and the remaining 30 billion won will be paid to leasing companies. The carrier will issue new shares to repay the rest of its debts.

A creditor meeting is scheduled for November, where the budget carrier is required to obtain consent from more than two-thirds of the creditors to pass the rehabilitation plan.

It is typical for the buyer to pay the acquisition price five business days before the creditor meeting, but Sung Jung is considering paying the purchase price as early as next month in a bid to dispel concerns over its ability to own the budget carrier.

Eastar Jet will also speed up its efforts to normalize its business, eying to resume its flight services early next year.

It will embark on a process to obtain an air operator certificate (AOC) from the Ministry of Land, Infrastructure and Transport by December, with a goal to resume domestic flights after a one and half-year hiatus. Its AOC become ineffective as of March last year when most of its flight went out of service.

The air carrier currently has two Boeing 787-800 aircraft and is planning to lease one additional 787-800 jet after returning two Boeing 737 Max jets, which are banned from domestic operations.