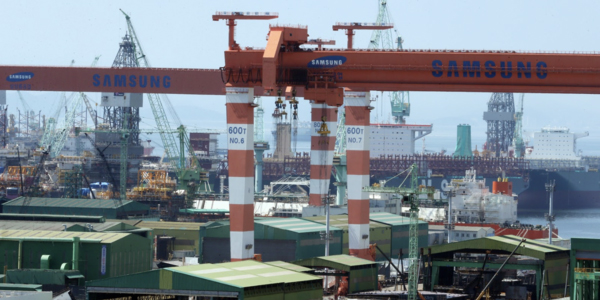 이미지 확대
Samsung Heavy Industries Co. has become another major Korean name to streamline or withdraw business in China as it has decided to sell one of its two ship bloc manufacturing lines in China as part of efforts to improve the production efficiency.

The latest decision was made to improve the operation efficiency of its overseas plants. Samsung Heavy Industries Ningbo has supplied ship blocks to Samsung Heavy’s main Geoje shipyard for 26 years, but its manufacturing efficiency has worsened recently due to aged facilities.

“Block manufacturing will be carried out at one integrated factory in Rongcheng, Shandong Province with rationalized facilities for higher productivity,” said a company official.

Samsung Heavy Industries built the Ningbo plant in 1995 and Rongcheng plant in 2006 to meet the growing shipbuilding demand and secure the price competitiveness. The two factories yearly output amounted to 150,000 tons and 200,000 tons as of the end of last year.