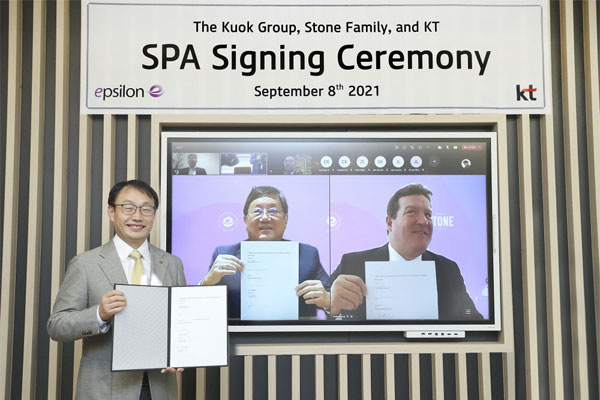 KT announced on Thursday that it acquired a 100 percent stake in Epsilon Global Communications from Malaysia’s Kuok Group for $145 million in partnership with Daishin Private Equity under local brokerage Daishin Securities. Details of share distribution between the two were not disclosed.

The deal, which is aimed at securing a foothold for KT’s expansion into the global market, is the first large-scale global acquisition to take place since CEO Koo Hyun-mo took office in March 2020. Under Koo’s leadership, KT has been accelerating its transition from a traditional telco to a digital platform company, “digico.”

Based in Singapore, Epsilon is a global data company that provides IT platforms and solutions to global leading telecom companies to transmit data safely across borders.

Epsilon is a relatively small company with 197 employees but it boasts more than 260 PoPs in 41 cities across 20 countries, five times that of KT, and operates three internet data centers (IDCs) in London, New York and Singapore. Its main clients include T-Mobile, Vodacom, Telegram, and Shangri-La Hotels and Resorts.

The data company also operates network-as-a-service (Naas) platform called Infiny, which provides businesses with high-performance connectivity and communications services. The award-winning on-demand connectivity platform powered by cloud technologies enables businesses to manage local, regional, and global connectivity seamlessly using a web-based portal with real-time analytics from wherever they are. It would take more than 15 years and 80 billion won to build the level of network infrastructure owned by Epsilon, KT said.

“We expect the deal will generate substantial synergies for both KT and Epsilon. By leveraging on our network infrastructure in Korea and Asia and Epsilon’s centers in Europe and the U.S., KT can provide wider coverage, ensuring seamless communications for local businesses expanding into global markets,” said Moon Sung-wook, head of KT’s global business division who led the deal told Maeil Business Newspaper.

KT will boost the corporate value of Epsilon levering on its operation know-how with a plan to list the company in the future, Moon said.

By Na Hyun-joon and Lee Soo-min