EcoPro BM stock on a roll on $8.6 bn order from SK Inno, more may come 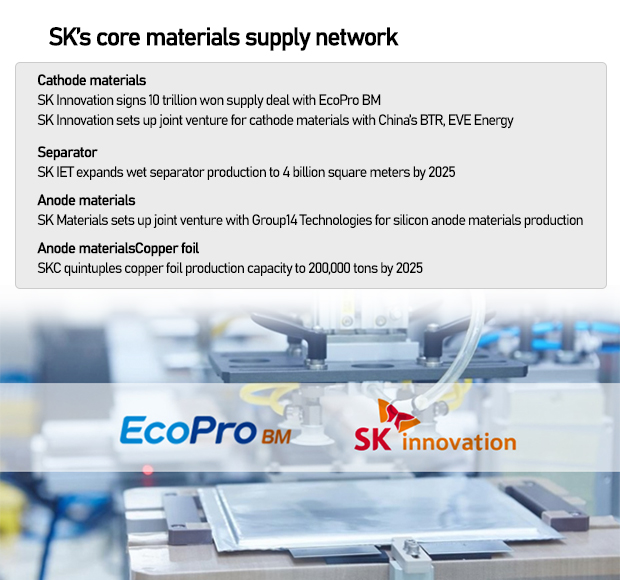 Kosdaq-listed shares of EcoPro BM rose 12 percent to close at 400,500 won on Friday, after touching a new 52-week intraday high of 405,000 won. The stock had finished previous session up 6.21 percent.

Investors flocked to the unfamiliar name after it disclosed a 10.1 trillion won deal to supply high-nickel NCM cathode materials to SK Innovation for three years from 2024.

In February last year, SK Innovation and EcoPro BM signed a 2.7 trillion won supply deal for cathodes until 2023. The latest contract would stretch the supply volume to more than 300,000 tons from the previous 20,000 tons.

Cathode materials are a key material that determine battery performance. They account for about 50 percent of battery cost.

Brokerages also rushed to raise their target stock price of EcoPro BM to over 500,000 won as they became sanguine about new orders and expansion.

At 500,000 won, the company’s market cap would surge to 10.96 trillion won from current 7.8 trillion won. EcoPro BM command the second in Kosdaq cap after Celltrion Healthcare.

Han Sang-won, researcher at Daishin Securities, said that EcoPro BM’s NCM production capacity os currently at 60,000 tons and would have to expand. He projected the company to unveil a plan to build a factory in the United States this year and bump up capacity to 400,000 tons by 2025. 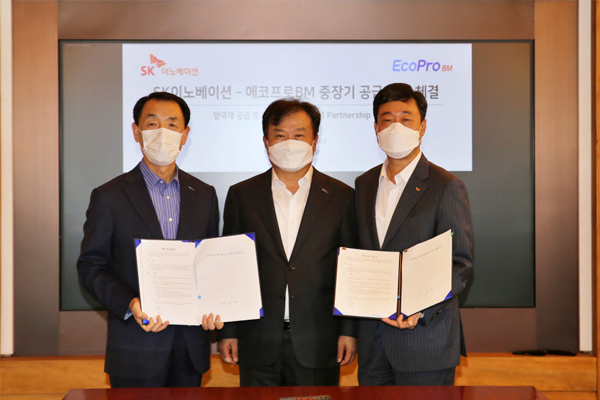 A surge in cathode materials order comes amid growing demand for batteries globally, especially with Korean players speeding up efforts to establish their own battery materials supply network and enhance value chain.

Through the long-term supply, SK Innovation would be securing high-performance cathode materials supply from home turf. EcoPro BM is investing 500 billion won additionally to cathode facility under construction in Pohang, North Gyeongsang Province. The company had previously pledged to invest 1.7 trillion won by 2024 to complete a factory for secondary battery cathode material full-cycle system in Pohang in North Gyeongsang Province with a 100,000-ton capacity by 2026..

The company is also a leader in high-nickel cathode materials that are used in high-performance batteries. High-nickel is a battery that has high composition of nickel in NCM cathode material that includes nickel, cobalt, and manganese. The higher the nickel, the better battery performance.