South Korea’s largest automaker Hyundai Motor Co. reported its best quarterly results in seven years in the second quarter with its operating profit more than tripled on year thanks to solid demand for premium Genesis brand and SUV models despite disrupted production due to protracted chip shortages amid resurgence of Covid-19 infections.

Hyundai Motor in its regulatory filing on Thursday said its consolidated operating profit reached 1.89 trillion won ($1.64 billion) in the quarter ended June, gaining 13.8 percent from a quarter ago and 219.5 percent from a year earlier. The number marked the largest since the fourth quarter of 2014 when the automobile industry enjoyed its heyday.

Net profit came at 1.98 trillion won after adding 30.2 percent on quarter and 425.5 percent on year, and sales rose 10.7 percent from three months ago and 38.7 percent against the previous year to total 30.33 trillion won, the first milestone above 30 trillion won on record.

Operating margin, which measures income against sales, reached 6.2 percent, up 0.2 percentage point from the previous quarter.

The results fell in line with the market consensus of 1.91 trillion won in operating profit and 28.97 trillion won in revenue compiled by Seoul-based financial data provider FnGuide as of Wednesday.

In response to the protracted chip shortage, the company has adjusted production schedule to minimize disruption in vehicle output and vowed to offset the losses in the second half of the year.

“Things will improve from the third quarter, and the company has already completed chip orders required for assemblies next year,” said Koo, adding that it will seek for a partnership with chip makers in the mid- to long-term. 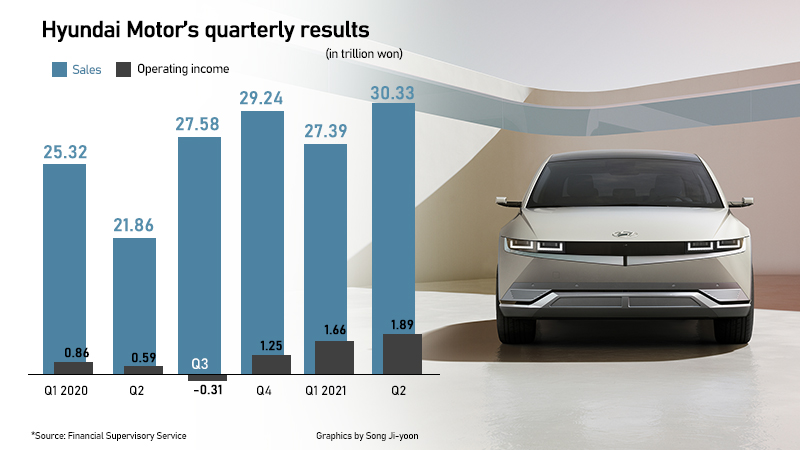 In its guidance for the second half of the year, Hyundai Motor estimated sales growth in most markets despite global chip shortages. It has been upgrading the Asan plant to maximize the EV production capacity, and Ioniq 5 will be rolled out from the plant from next year, Koo added.

Hyundai Motor also announced that it would resume quarterly dividend payouts worth 260.3 billion won that have been suspended under the virus crisis since last year.