Naver’s search platform raised 826 billion won in revenue, up 9.7 percent on quarter and 21.8 percent on year. The surge was led by search quality improvement and increased advertisement efficiency.

Commerce unit raised 365.3 billion won in revenue in the April-June period, up 12.6 percent on quarter and 42.6 percent on year on the back of steady growth of brand stores as consumers relied on online shopping in a pandemic environment. Brand store transactions were up five times from a year-ago period and shopping live revenue was 17 times higher.

Fintech business raised 232.6 billion won in revenue, up 11 percent on quarter and 41.2 percent on year on growth of existing partner malls and expansion in external partners. Naver Pay payment reached 9.1 trillion won in the second quarter, up 47 percent from a year ago. 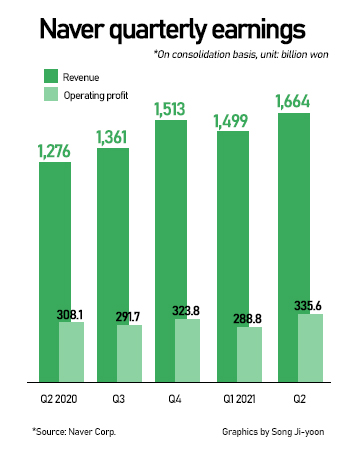 이미지 확대
Contents business raised 144.8 billion won in revenue in the second quarter, up 10.7 percent on quarter and 28.2 percent on year, thanks to growing popularity of webtoons that saw a 53 percent on-year jump in revenue. Sales of its smartphone application SNOW also more than doubled.

Cloud business also saw revenue increase 16.2 percent on quarter and 48.1 percent on year to 94.9 billion won on the back of higher demand for public cloud service. Naver Cloud Platform saw revenue jump by more than 77 percent year-over-year in the second quarter.

Han Seong-sook, chief executive of Naver, said that the latest figures show that steady growth is possible through research and development, service, and business model innovation.

She said that Naver will continue to enhance alliance with strategic partners and carry out global content intellectual property business to solidify base for future growth to realize performance of diverse businesses on global stage based on strong domestic business.

Naver separately disclosed Thursday that it has joined hands with CJ Logistics to provide faster delivery service to its smart store vendors by creating an additional 661,157 square meter fulfillment center responsible for product storage, packaging, shipment, and delivery all in one process.