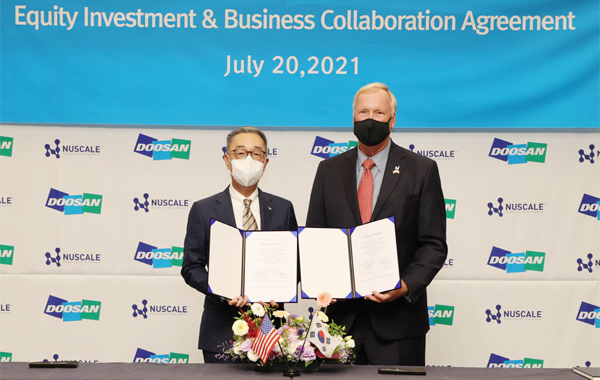 South Korea’s Doosan Heavy Industries & Construction Co. pledged an additional equity investment of $60 million in U.S.-based NuScale Power, doubling down on small modular reactor (SMR) business to make use of its expertise in power generation equipment that has become wasted from the government’s plan to phase out of nuclear reactors.

Doosan Heavy Industries announced Tuesday that it has signed an equity investment worth $60 million with U.S. SMR developer NuScale Power in addition to $44 million invested in 2019. No details have been given on how much stake Doosan will own in the U.S. company with the latest investment.

NuScale Power designs and markets SMRs with a power output of less than 300 megawatts based on pressurized water reactor technology. SMRs emit less carbon and have a significantly lower risk of leakage than larger nuclear reactors.

Under the expanded strategic partnership, Doosan Heavy will be able to win additional billions of dollars in SMR equipment orders from NuScale. The two companies have also agreed to expand cooperation in hydrogen and fresh water production using SMRs.

For the first project under the partnership, the Korean power plant builder will join the construction of NuScale’s SMR plant on the Idaho desert for U.S. public power consortium Utah Associated Municipal Power Systems (UAMPS). The plant will have 12 SMR modules that could generate a total 720 megawatts of carbon-free electricity and is expected to be fully operational by 2029.

Doosan is currently working on prototypes of reactor modules for NuScale after obtaining design certification from the U.S. Nuclear Regulatory Commission in 2019.

By Lee Yu-sup and Lee Soo-min