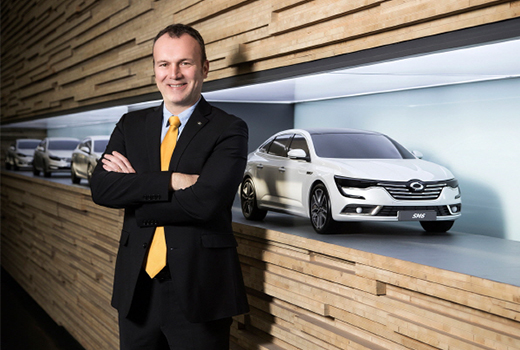 Dominique Signora, CEO of Renault Samsung Motors, told reporters on Thursday during the XM3 media conference in Yongin, Gyeonggi Province that the company is going all-out efforts to raise the export competitiveness of Europe-bound XM3.

Renault’s Busan factory is in charge of producing the XM3 that are shipped out to Europe under the name of New Arkana.

Renault Samsung relies on the success of the hard-won new model after it lost mainstay product Nissan Rogue last year, he said.

To overcome the plant’s waning competitiveness from reduced output, higher fixed cost and waning market share, Renault Samsung has to supply the Europe-bound model on time to expand output and operating rate to enhance income and job security, he added.

The French parent has given the Busan plant priority in the access of automobile chips amid global shortages to help its turnaround through the successful launch XM3, said Signora.

Pointing to unresolved conflict over collective and wage bargaining, he warned that union strike damages the image of the producer and the brand reputation in Europe, he said.

Renault Samsung Motors on the same day unveiled the newest version of the XM3 with the same design as the Europe-bound model with upgraded safety and convenient specs like highway & traffic jam assist (HTA) and remote engine start/thermal and energy management solutions.