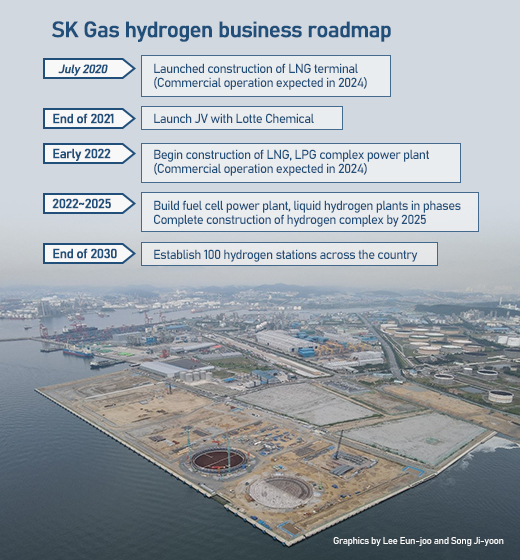 According to multiple industry sources on Monday, SK Gas is spending billions of dollars to establish a hydrogen value chain complex along the southern coast of Ulsan City by 2025.

The company will be in charge of creating a comprehensive hydrogen economy from import of raw materials and production to storage and distribution.

The mammoth project is expected to cost several billions of dollars and shift the company’s mainstay in LPG and LNG business to hydrogen.

South Korea is going all-out on hydrogen economy to make the clean fuel its primary energy source over nuclear and fossil fuel. The state-led push has engaged most of the key companies including SK, Hanwha, and GS.

Industry sources expect that SK Gas will initiate its hydrogen business based on byproduct hydrogen over green or blue hydrogen costing much longer time and more investment to develop and produce.

The sourcing would come from Ulsan-based SK Advanced capable of producing 30,000 tons of byproduct hydrogen annually.

Sources noted that SK Gas is capable of enhancing competitiveness in hydrogen extract production through its gas factories and terminal infrastructure.

SK Gas is engaged in trade of both LNG and LPG that are used as raw materials to produce extracted hydrogen, allowing it to secure raw materials at lower cost.

Produced hydrogen will be supplied to gas generators and fuel cell facilities in Ulsan, where the company has a hydrogen pipe over 100 kilometers long.

SK Gas has already invited partners for its ambitious project.

The company signed a memorandum of agreement with Lotte Chemical to establish a joint venture last month to build a fuel cell power plant based on byproduct hydrogen and hydrogen charging stations. It entered into a MoU with Korea East-West Power and Doosan Heavy Industries last week to carry out a hydrogen dual fuel gas turbine development demonstration project.

By Lee Yoon-jae and Lee Eun-joo