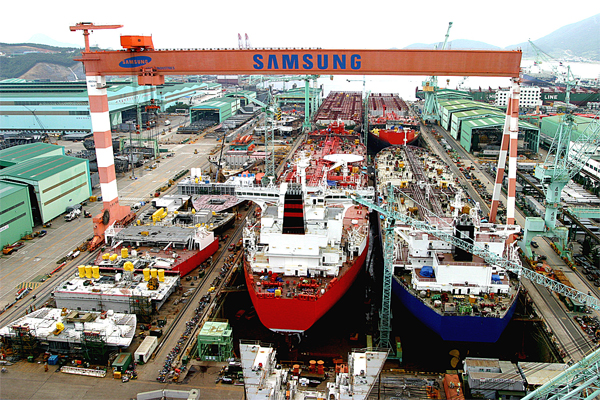 이미지 확대
Shares of Samsung Heavy Industries Co. recovered Friday after a heavy dip on the previous day as investors displayed disappointment over its first-quarter results and recapitalization scheme of lowering the face value of its stock and then issuing 1 trillion won ($892 million) worth new shares.

Samsung Heavy fell 16.2 percent to close Thursday at 6,000 won on the Seoul bourse after losing as much as 21 percent.

The result came in below the market expectations, triggering the company stock price to tank as much as 21 percent during a session on Thursday.

Investors were also unhappy about its recapitalization scheme.

In a separate filing on the same day, the company disclosed that it will reduce the face value of its stocks by a fifth from 5,000 won apiece to 1,000 won on July 26. The move will also be followed up by 1 trillion won rights issue.

“We are concerned about its continued deficit, worsening financial structure due to delays in the sale of its drill ships, and possible share dilution after rights offering,” a senior researcher at Shinhan Investment added.

But in the mid to long term, the latest financial restructuring and new share issuance plan will ease uncertainty in the company’s financial health, and the company would be able to enjoy the upswing in the overall shipbuilding industry, said Lee Bong-jin, analyst at Hanhwa Investment & Securities Co.

By Kang Bong-jin and Lee Soo-min