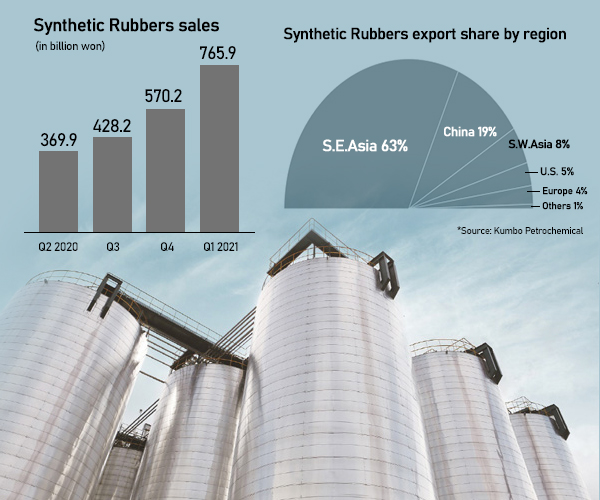 Kumho Petrochemical is the largest producer in Korea with an annual capacity of 256,000 tons of styrene-butadiene rubber (SBR) for tires.

The company for the first three months delivered an operating profit of 612.5 billion won ($546.1 million) with record sales of 1.85 trillion won thanks to solid performance across the board. Revenue from the synthetic rubber business, in particular, reached 765.9 billion won after gaining 63 percent from the previous year, feeding more than 40 percent to the total revenue.

“A tire is replaced usually in eight years. The previous replacement demand growth was made in 2012-2013,” said an industry source. “Demand started picking up last year, but supplies were interrupted due to lockdowns. With the rapid rollouts of Covid-19 vaccines, tires will be fast replaced in China.”

Expectations for a demand growth for original equipment (OE) tires also are growing.

The export prices of butadiene (BD) tires and SBR tires surged by 58 percent and 41 percent, respectively on year last month in Korea, according to industry sources. The margin from SBR tires has exceeded $1,000 per ton this year.

“Kumho Petrochemical’s operating profit is forecast to increase at least 10 percent on quarter in the April-June period and expand throughout the year to hit above 1 trillion won for full year,” said an industry official.