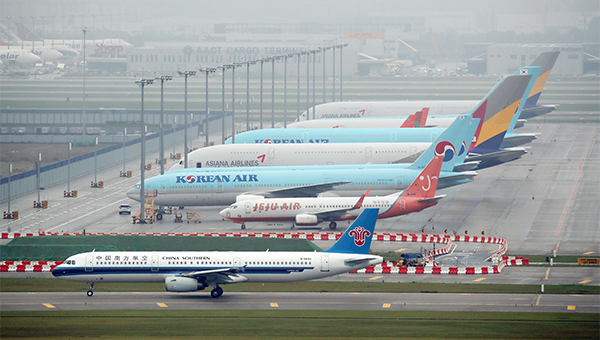 South Korea’s air traffic volume at local airports in April doubled from a year-ago period to top 30,000 for the first time in 14 months, although still halved against pre-pandemic levels.

According to Air Portal run by the Ministry of Land, Infrastructure and Transport on Wednesday, the nation’s air traffic reached 31,927 carriers, up 14.3 percent from the previous month and 98.8 percent against a year ago. This is the first time that air traffic exceeded 30,000 since the first wave of the pandemic hit the country in February last year.

Traffic in domestic airspace was congested, with domestic flight passengers hitting 2.95 million, close to the record high of 3.03 million in October 2019. It may swell to over 3 million in May as the country celebrates public holidays like Children’s day and Buddha’s Birthday. Jeju Air operated 3,678 domestic flights, the highest among local airlines, followed by Jin Air with 3,513 flights. Jeju Air also carried the most domestic passengers of about 610,000. 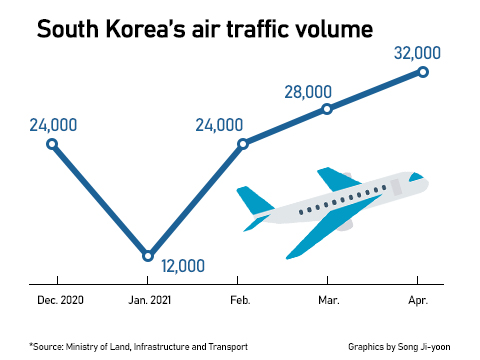 이미지 확대
International traffic remains mostly idled at 30 percent of the pre-pandemic capacity as flights beyond the frontier deliver cargoes than people. The number of international flight passengers stood at 177,393 in April, slightly falling from a month ago. Korean Air Lines serviced the most international flights of 3,780.

Last year, international passenger flight brought in only 23.8 percent of the total revenue raised by Korean Air Lines, compared with 60.6 percent in 2019.

Cargo shipments came to 240,173 tons in April, gaining 4 percent on year. Korean Air carried more than half, or 134,217 tons of the cargo shipped by air in the country followed by Asiana Airlines with 58,765 tons and budget carrier Air Incheon with 1,566 tons.

By Lee Yu-sup and Lee Soo-min