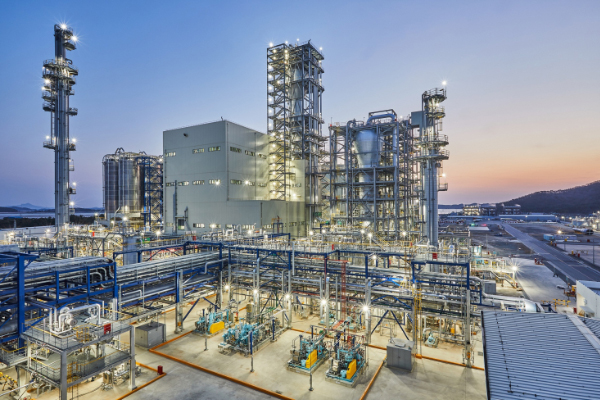 The Korean petrochemical company said Wednesday that it has completed building a new polypropylene plant and expanding a gas cracking center for ethylene production at the Daesan petrochemical complex in central Korea. The company invested 380 billion won in the new polypropylene plant with an annual production capacity of 400,000 tons and another 150 billion won in the gas cracking center to boost ethylene production capacity by 150,000 tons.

With the latest expansion, Hanwha Total Petrochemical has become Korea’s largest polypropylene producer with an annual production capacity of 1.12 million tons. Also, the company now is able to supply 1.53 million tons of ethylene every year.

The company estimated the newly added facilities would deliver additional 840 billion won in revenue a year.

Polypropylene is basic material for making plastics, which are used in a wide range of products such as packaging and automotive parts.

Its prices have shot up amid a spike in use of plastics since the Covid-19 pandemic last year.

Polypropylene prices averaged at $1,140 per ton in the first quarter of this year, soaring from last year’s average of $871, according to the Korea Petrochemical Industry Association.

The company will also be able to respond more flexibly and promptly to the fluctuation in raw material prices after it upgraded its gas cracking center that can now use both naphtha and liquefied petroleum gas (LPG) to produce ethylene, also a basic material for making plastics.