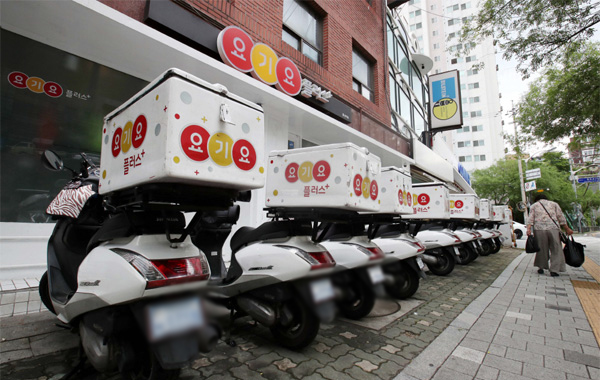 이미지 확대
The race to acquire Yogiyo has drawn retail giants, big private equity funds and even hotel-booking app operator, ramping up the expectations for South Korea’s No. 2 food delivery app with an estimated price tag of up to 2 trillion won ($1.8 billion).

Despite the hefty price tag, Yogiyo is an attractive catch for the contenders.

Yanolja, the country’s No. 1 travel and accommodations reservation app, is said to be eyeing the food delivery app to grow as a comprehensive consumer service provider. It is reported that Yanolja is seeking to form a consortium with private equity funds instead of launching an independent bid, tipped an investment banker.

Private equity firms are also anticipated to team up with local conglomerates who had not taken part in the preliminary tender.

Yogiyo is No. 2 food delivery app in Korea with market share of 30 percent as of September last year, according to market researcher Nielsen Korea. Its share is only half of top player Baedal Minjok’s 59.7 percent but more than quadruple of No. 3 Coupang Eats with 6.8 percent. Baedal Minjok and Yogiyo’s shares reportedly contracted to 53 percent and 27 percent, respectively, as of February but they, nonetheless, far outrun the rivals.

There, however, is a downside risk for investors. The buyer would also need to make additional investments for years as e-commerce players are still in fight over market share for growth rather than making profits.

Yogiyo was placed up for sale after Germany’s Delivery Hero received an order from the Korean antitrust agency in December to dispose the No.2 player in order to keep No. 1 Baedal Minjok.

Delivery Hero has until August to divest Yogiyo. It can apply for an extension of up to six months for inevitable circumstances.