Korean battery majors behind 31% of global EV power in Q1, below Chinese peers

South Korean three majors were behind 31 percent of electric vehicle power in the first quarter, reduced from 37.8 percent a year-ago period although their output nearly doubled due to faster ascension by Chinese names.

The top three battery makers in Korea – LG Energy Solution Ltd., Samsung SDI Co., and SK Innovation Co. – took up a combined 30.9 percent share in the January-March period, down 37.8 percent from the same period a year earlier, according to market research firm SNE Research on Monday.

Global EV battery market grew by 127 percent with the total usage volume of 47.8 gigawatt-hours (GWh) during the same period.

LG Energy Solution’s battery usage volume surged 89.3 percent thanks to strong sales of its customers Tesla Model Y, Volkswagen ID.3 and Ford Mustang Mach-E. Its market share still fell to 20.5 percent from 24.6 percent a year ago, and the company stayed as the second largest producer in the global market.

Samsung SDI also saw a 57.2 percent rise in usage with its market share down to 5.3 percent from 7.7 percent over the same period. 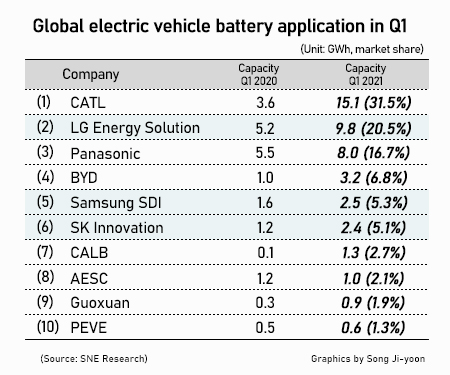 이미지 확대
Kona EV in Europe, but its market share was down to 5.1 percent from 5.5 percent.

Samsung SDI and SK Innovation came in fifth and sixth in the global EV battery ranking.

Japan’s Panasonic ranked third but its share contracted to 16.7 percent from 26 percent as well.

In contrast to their global peers, Chinese EV battery makers mostly expanded their market shares, driving the overall EV battery market growth amid a fast recovery in EV demand in the domestic and global markets, according to SNE Research.

China’s CATL ranked top by commanding 31.5 percent in the local market, BYD fourth with 6.8 percent, and CALB seventh with 2.7 percent.

In March alone, the global EV battery usage amounted to 22.1GWh, gaining more than 2.5 times from the previous year.

“With EV battery technology undergoing swift changes and rising competition under way, the Korean battery makers seem to be backing out due to Chinese players,” SNE Research said in a report. “With CATL at the head, Chinese battery makers are eating up the global market at an alarming rate and will likely trigger fiercer competition in the EV battery market in the near future.”