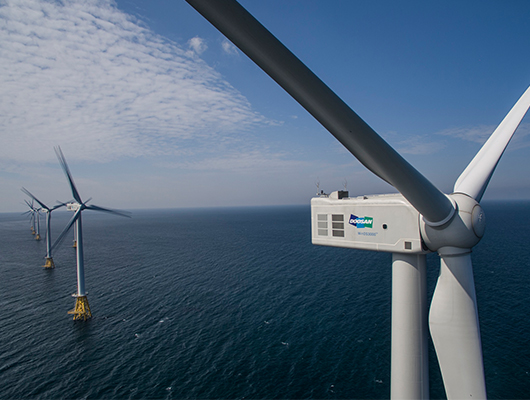 Doosan Heavy Industries & Construction Co. has accelerated the diversification of hydrogen business amid its business shift to renewable and future technology business from fossil and nuclear fuel generation.

Doosan Heavy announced Monday that it will produce so-called ‘blue hydrogen’ by applying high-efficient carbon capture, utilization and storage (CCUS) technology at its hydrogen liquefaction plant under construction in Changwon, South Gyeongsang Province. The construction of the factory is expected to be completed by 2022.

Blue hydrogen is hydrogen produced during a process in which natural gas is split into hydrogen and carbon dioxide (CO2) emissions that are captured and stored.

The company is also producing green hydrogen, which refers to hydrogen fuel created using renewable energy instead of fossil fuels, at its wind farm in Jeju Island.

Doosan Heavy is reviewing its plan to produce clean hydrogen through small modular reactors (SMRs). The emission-free renewable and nuclear energy is emerging as important sources to create clean hydrogen.

Doosan Heavy has been doubling down its efforts to reinvent its business model to eco-friendly one in line with the Korean government’s green economy drive. The government earlier announced its plan to secure 8-gigawatt hydrogen production capacity by 2040 as it projected the demand for hydrogen to increase to 1.94 million tons in 2030 and 5.26 million tons in 2040.

“We will pre-occupy the domestic hydrogen market by expanding hydrogen production and equipment manufacturing based on our existing business expertise,” an official from the company said.