Samsung Electronics Vice Chairman Jay Y. Lee took up half of his late father’s 20.76 percent holding in Samsung Life Insurance to command the largest individual stake in the insurer that is the biggest shareholder in Samsung Electronics to solidify his grip over the No. 1 conglomerate in South Korea.

The rest of Lee Kun-hee’s equity holdings was divided among the rest of the family - the widow, Lee and two daughters - according to legal ratio to even out the liability of colossal inheritance dues of 11.4 trillion won ($10.2 billion) for Lee’s stock riches of 20.4 trillion won, of which Samsung Electronics makes up the lion’s share of 20.3 trillion won.

With 10.38 percent added, the eldest son becomes the second largest shareholder of Samsung Life with 10.44 percent. The second daughter and youngest who did not have any share in the insurer would own 6.92 percent and 3.46 percent.

Samsung C&T, 33.42 percent owned by Samsung owner family and Samsung umbrella foundations, is the largest shareholder in Samsung Life with 19.34 percent. With his father’s stake addition, Lee’s stake in Samsung C&T is boosted to 18.13 percent from 17.48 percent. 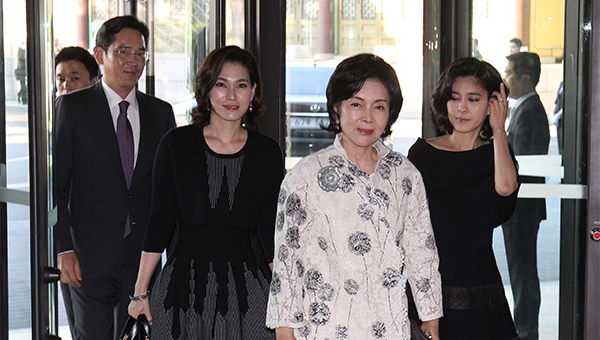 The heirs chose to equally share the patriarch’s stake in Samsung C&T since the eldest already held comfortable command.

They also divided Lee’s stake in Samsung Electronics according to legal ratio instead of placing them entirely under the vice chairman largely due to the hefty cost of the shares of the country’s most valuable company. With Lee’s 4.18 percent division, wife Hong Ra-hee’s share goes up to 2.3 percent and Lee to 1.63 percent and the daughters who did not own any in Samsung Electronics to each 0.93 percent.

Lee would have been liable to 8 to 9 trillion won of total 12 trillion won tax dues for inheriting his father’s stock wealth valued over 24 trillion won as of Friday’s closing price, of which the share in Samsung Electronics makes up the bulk at 20.3 trillion won, if he inherited the entire lot.

The transparent and even stake division would put Samsung Group under stable control of Lee without any dispute among the siblings and about illegalities.

Kim & Chang, legal representative of the Lee family, on Friday filed tax inheritance report with a tax office in Seoul and paid up one sixth of the dues. The family would be paying around 12.5 trillion won worth in taxes for succeeding to Lee’s total wealth in six installments over five years.