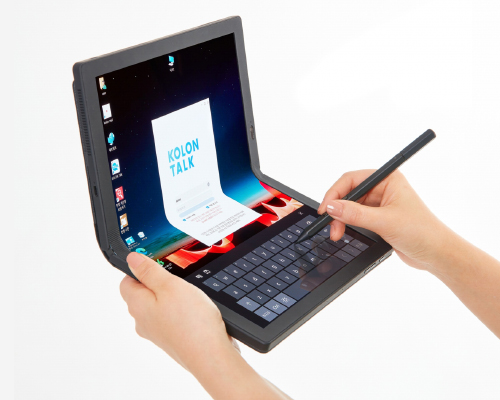 Its CPI films have mostly been used for foldable smartphones. An official from the company said it is the first time for the CPI film to be used for mid- to large-sized foldable display like a laptop and it is also the world’s first flexible display to have applied touch pen technology.

ThinkPad X1 Fold was first released in the North American market at the end of last year. It became available in Korea since February.

The CPI film is as transparent as glass and can be bent hundreds of thousands of times without leaving any scratch or crack. The material boasts a long-time durability and can withstand extreme temperature changes, which makes it optimal for IT devices in various size and design.

Kolon Industries began developing the transparent CPI film in the mid-2000s and succeeded in mass production in 2019. It has been supplying the material to multiple global display makers.

The company is seeking partnerships with global display producers to expand supply of its CPI films for various devices. According to display market researcher Display Supply Chain Consultant (DSCC), the global foldable display market is expanding from small-sized smartphones to tablet PCs and laptops, and it is expected to grow by 131 percent per year over the next four years.

“Kolong Industries’ innovative technological capabilities have been recognized in the global market with its CPI film applied to the world’s first foldable laptop,” said Kim Jung-il, the head of the CPI business at Kolon Industries.