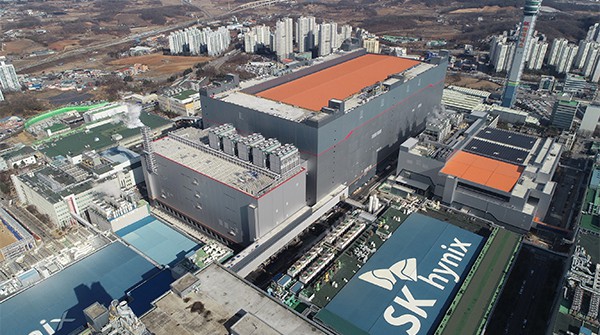 SK Hynix Inc., the world’s second-largest memory maker, expects to leapfrog in NAND where it is a modest fourth, due to strengthening in prices in flash memory and synergy with its $9 billion acquisition of NAND business from Intel.

SK Hynix’s NAND flash business made $1.63 billion in revenue in the fourth quarter ended December, accounting for 11.6 percent, coming at fourth after Samsung Electronics, Kioxia of Japan, Western Digital of the U.S.

In the October-December period, revenue in the global NAND flash market totaled $14.1 billion, down 2.9 percent from the previous quarter. NAND flash total bit shipments surged 9 percent during the same period but this was offset by a 9-percent decline in the overall average selling price.

Market tracker TrendForce noted that “clients in the server and data center segments continued their inventory reduction efforts that had begun in Q3” and that “since their procurement drive remained fairly weak, contract prices of NAND flash products continued their decline as well.”

The prices are expected to strengthen from the second quarter in line with the growth in the bit output of the NAND flash industry and renewed demand for data centers, it said.

SK Hynix has been endeavoring to beef up its NAND memory to the ranks of DRAM commanding a comfortable No. 2 with a 29.5 percent share. 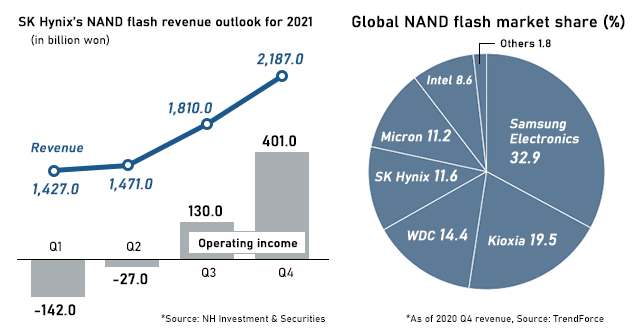 이미지 확대
In December last year, SK Hynix was the world’s second player to successfully develop 176-layer 4D NAND flash products, securing the industry’s highest number of production chips per wafer. Data-storing cells are stacked up on a wafer in a NAND flash memory, and the higher the cell the more chips can be produced in a single wafer to lead to enhanced productivity. SK Hynix expected bit productivity to improve by more than 35 percent from the previous generation.

The recovery in the NAND flash demand and price can solidify grounds for SK Hynix’s leap in the market as it progresses with its deal to buy out NAND flash business by the end of this year for complete acquisition by 2025. Based on fourth-quarter sales, SK Hynix becomes No. 2 with $2.83 billion, when combined with Intel’s $1.2 billion revenue from NAND business, exceeding $2.72 billion of Kioxia.

The acquisition is also expected to enable SK Hynix to secure solution technology and engineering capacity. Intel is known for its leading technology in solid state drives for corporations.

SSDs are a storage device produced by sticking multiple NAND flash chips. Securing solution technology is considered a must to develop NAND flash to SSDs.