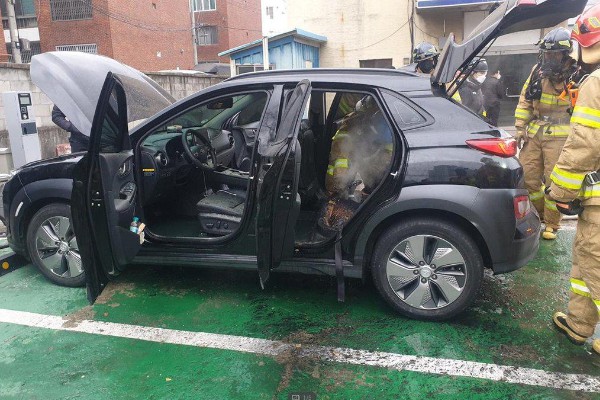 LG Energy Solution Co. will shoulder about 70 percent and Hyundai Motor Co. the rest 30 percent for around $833 billion global recall to replace battery systems of 81,701 electric Kona and other EVs shipped over the last three years bearing the Korean automaker’s marque and powered by the country’s top battery maker.

The cost-sharing scheme was agreed in just weeks after the transportation ministry announced on Feb. 24 a voluntary recall by Hyundai Motor on all of its EVs including 25,083 Kona and 1,314 Ioniq models after a state-led probe on reports of fires.

The investigation found some battery cell defective and fire-prone in high-voltage batteries produced at LG Energy Solution’s Nanjing factory in China from September 2017 to July 2019. LG at the time refused to admit to battery defect.

Although the two have not detailed the exact cost-sharing, they both disclosed changes to their fourth-quarter financial statement to reflect recall cost after the stock market closed on Thursday.

LG Chem., which owned the battery unit before it spun off in December, revised down its 2020 operating profit from 673.6 billion won to 118.6 trillion won to suggest about 550 billion won set aside for recall share.