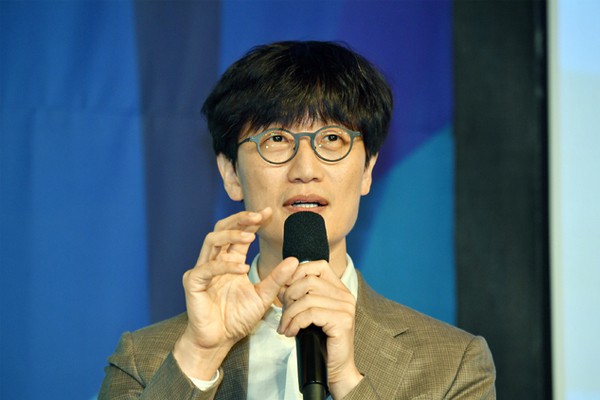 The integrated entity of Naver and SoftBank, the top IT names of South Korea and Japan, will leverage AI technology to broaden their market beyond the home turfs, starting with Southeast Asia.

Z Holdings, the integrated parent to Japan’s most widely used chat app Line under Naver and Yahoo Japan, will spend 500 billion yen ($4.7 billion) in AI solutions to reinforce its footprint in the Southeast Asian e-commerce and online platform market.

The integrated Z Holdings is owned 65.3 percent by A Holdings. The 50:50 joint venture between Naver Corp. and SoftBank Group Corp. officially began operation on March 1. The firm is co-headed by Naver’s founder and global investment officer Lee Hae-jin and SoftBank CEO Ken Miyauchi.

Z Holdings is now a $30 billion tech giant with more than 100 million users on a monthly basis across messaging, online advertising and financial services.

Han Seong-sook, chief executive officer of Naver, in an online briefing on Tuesday announced the new tech giant’s plan to invest 500 billion yen in future technologies to develop AI-backed online services over the next five years. The firm aims to expand its presence beyond Japan with more focus on Southeast Asia.

Naver plans to leverage its e-commerce capability built through SmartStore, a popular online store platform among Korea’s mom-and-pop businesses, for its further growth in Southeast Asia, according to Han. 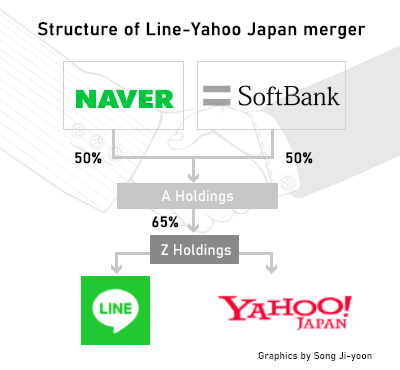 이미지 확대
Southeast Asia is a burgeoning market with the middle-income population projected to reach 200 million by 2025. Local competition, however, is also getting fiercer with multinationals jumping in while local firms are rising rapidly. Grab is leading the ride-hailing service market in Southeast Asia. In the e-commerce sector, Shopee and Tokopedia are quickly winning consumers.

Naver has already made inroads into Southeast Asia. In Thailand, it is enjoying solid growth in the mobile chat and delivery sectors.

However, Naver would need to do much more as its Japanese online platform partner has little overseas experience. To speed up its expansion in Southeast Asia, Naver aims to beef up AI-backed online services through capital investment and increased manpower. Z Holdings plans to hire 5,000 AI engineers.

Z Holdings, meanwhile, must pursue more support from SoftBank Vision Fund, which has made big investments in tech companies across the world, to beat competition from global tech giants such as Google and Amazon.com. The market capitalization of Z Holdings is only about one-thirtieth of Google’s parent Alphabet.

For acceleration in the mobile payment market, Line Pay and SoftBank’s PayPay will be combined next year for an integrated service. Their collaboration would allow the two mobile payment app operators to ramp up their market share and cut heavy marketing expenses. Line Pay has 37 million users and PayPay with 19 million users in Japan.