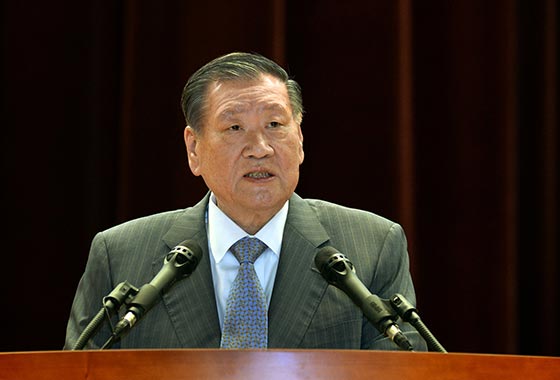 이미지 확대
Hyundai Motor Group Honorary Chairman Chung Mong-koo is formally leaving the automaking group he had built over the last 20 years by withdrawing his last title at the group as a board director of Hyundai Mobis Co. and leaving full driving up to his son Chung Euisun.

The 82-year-old entrepreneur’s withdrawal from the board will be declared at the annual shareholders’ meeting of Hyundai Mobis on Mar. 24 before his term ends a year later, according to industry sources on Sunday.

Chung, the eldest of the surviving offspring of Hyundai Motor Group founder Chung Ju-yung, will maintain the Honorary Chairman honor. He stepped down from the board of flagship Hyundai Motor Co. in March last year and handed over chairmanship to his son after 20-year reign. He left the board seat in Hyundai Steel in 2014 and Hyundai E&C in 2018.

Chung retained his executive level in Hyundai Motor and the board seat in Hyundai Mobis until last year. He then resigned from the helm of South Korean auto conglomerate and backed down to an honorary title in October.

Chung Mong-koo, born in 1938, had doubled as the board chair and chief executive of the auto mogul since March 1999. He built Korea as the world’s fifth largest vehicle producing country and became the first Korean indicted into the Automotive Hall of Fame, the industry’s top honor, in the class of 2020.