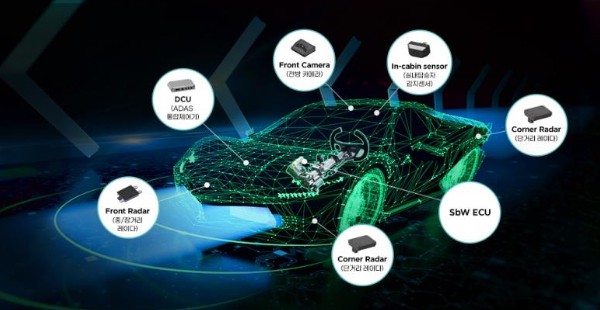 South Korea’s second-largest auto parts maker Mando Corp. is becoming the full owner of a joint-venture set up with German partner HELLA to go solo in the development and production of parts behind self-driving and electric vehicles.

The company on Wednesday disclosed that it has signed an agreement to acquire the equal stake in Mando Hella Electronics (MHE) from Germany-based HELLA for 165 billion won ($148.1 million) to command full ownership.

MHE was founded in 2008 in a 50:50 joint venture between Halla Holdings, the largest shareholder of Mando, and HELLA. The equity transaction will be completed in the first quarter.

MHE is an autonomous driving and automotive electronics company that produces awareness-related components in advanced driver assistant system (ADAS) such as radars and cameras and electronic control unit (ECU) components such as brakes and steering and related sensors.

The JV caught industry attention in 2018 when it began mass production of mid-range radar (MRR) sensors, a key ADAS component, for the first time in Korea.

Industry insiders noted that the acquisition of MHE suggests Mando has secured its own production competitiveness and no longer needs to rely on German technology.

Mando said that the complete takeover of MHE will allow it to further support local finished carmakers gain global competitiveness. The company will also expand its business in Suzhou, China, and Chennai, India, based on MHE overseas production base, and enter North America and Europe markets.

Mando expected the full ownership will also allow it to save on production costs of key autonomous driving vehicle components as it will allow creation of its own full cycle engaging from planning, demonstration, and production.

Mando, with 140 of MHE’s R&D workforce, also plans to boost its development capacity and diversify product category. It plans to complete a full line-up of ADAS radars by independently developing short-distance radars and also focus on development of passenger sensing sensors and next-generation control system.

MHE will also mass produce components related to an advanced driving system Mando introduced at CES 2021 last month. The steering system that separates steering wheel and wheels lightens vehicle weight and ups utilization of indoor vehicle space and is considered key to future cars such as electric and autonomous vehicles.

Mando, meanwhile, is reportedly expected to supply ADAS components such as front radars, cameras, and autonomous emergency braking (AEB) to 100,000 Level 3 autonomous all-electric vehicles that will be used as Amazon delivery cars from next year. It will also supply electronic duplexing driving system and electronic brake system.

By Seo Dong-cheol and Lee Eun-joo