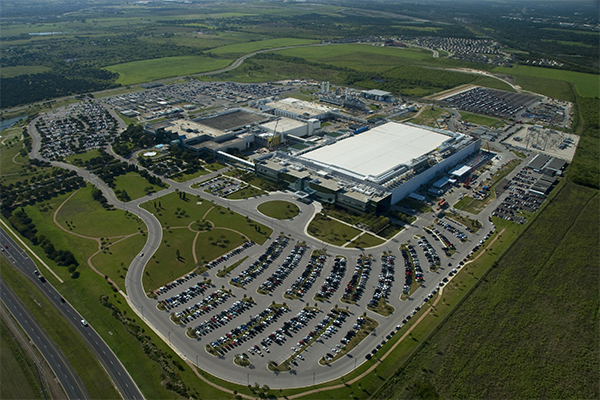 Samsung Electronics Co. on Wednesday announced it will expedite $17 billion foundry project in Taylor, Texas, in its single largest overseas investment to expand capacity for next-generation chips to power high-performance innovations from 2024.

In a press release on Wednesday, the South Korean tech giant confirmed Taylor as its new base for consignment chips for applications in mobile, 5G, high-performance computing (HPC), and artificial intelligence (AI).

Shares of Samsung Electronics closed Wednesday 0.66 percent lower at 74,800 won ($630.04). They gained 7 percent over the last three sessions as foreign investors returned in full force on imminent announcement on the expansion that could place the top chipmaker in better position to compete with dominant pure-play foundry TSMC over new orders for value-added chips.

The company will begin construction of the new plant in the first half of 2022 with an aim to begin mass production in the second half of 2024. It will be the largest-ever investment by Samsung Electronics in the U.S. and bring its total investment to more than $47 billion.

“As we add a new facility in Taylor, Samsung is laying the groundwork for another important chapter in our future,” said Kim Ki-nam, vice chairman and chief executive of device solutions division at Samsung Electronics. “With greater manufacturing capacity, we will be able to better serve the needs of our customers and contribute to the stability of the global semiconductor supply chain.”

Kim thanked the Joe Biden administration for “creating an environment that supports companies like Samsung” through federal and state level incentives for chip production. 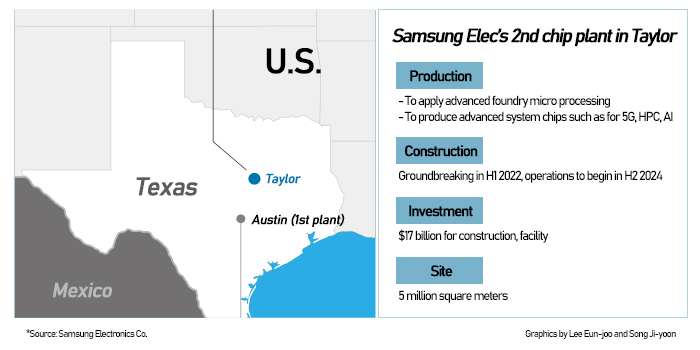 이미지 확대
Samsung Electronics selected Taylor, Texas, as the new location given its synergy with its existing facility in Austin, also in Texas. It also considered overall chip ecosystem, infrastructure supply stability, local government support, and community development opportunities, it said. The new plant is located 25 kilometers away from the Austin manufacturing site, which allows the two locations to “share the necessary infrastructure and resources.”

The new investment is expected to create more than 2,000 direct high-tech jobs and thousands of indirect jobs once the facility is in full operation. It will also provide financial support to build a Samsung Skills Center for the Taylor Independent School District (ISD) that helps students develop skills and provides internships and recruiting opportunities.

Samsung Electronics’ aspirations to bulk up foundry to better compete with TSMC have been stalled due to its chief’s prison confinement since the beginning of the year until parole in August. Vice Chair Jay Y. Lee has been in the U.S. to finalize the project decision.

TSMC has begun building a new foundry in Arizona as part of its $12 billion investment announced earlier.

TSMC accounted for 55 percent of global foundry market as of March, while Samsung Electronics commanded 17 percent.