DRAM recovery may be delayed to next year, boding ill for Korean chip majors

이미지 확대
Prices of server DRAM chip prices could fall 18 percent in the fourth quarter on quarter, boding badly for South Korea’s memory majors who counted on a turnaround in the year-end.

Taiwan-based market research company TrendForce in a report on Wednesday revised its price forecast of DRAM memory chips used in servers to a quarterly decline of 13 to 18 percent in the fourth quarter ending December, steeper than its earlier projection of 10 to 15 percent decline. Based on its projection, prices of DDR4 32-gigabyte server DRAM chips, a barometer for server DRAM price trend, would drop to $111.3 in the September-December quarter.

The prices for the server DRAM modules had reached $143.8 in the second quarter after gaining over 30 percent from $106, the bottom touched in the fourth quarter 2019, as demand grew sharply on increased orders from American data center operators such as Amazon and Microsoft.

But now, DRAM customers have relatively high stockpiles of server DRAM chips, suggesting that one to two quarters would be needed to correct the level or they would not resume server DRAM chip procurement until late 2020 or early 2021, said the report.

The situation would cause a setback to Samsung Electronics and SK Hynix, as sever DRAM chips are their primary earnings driver. 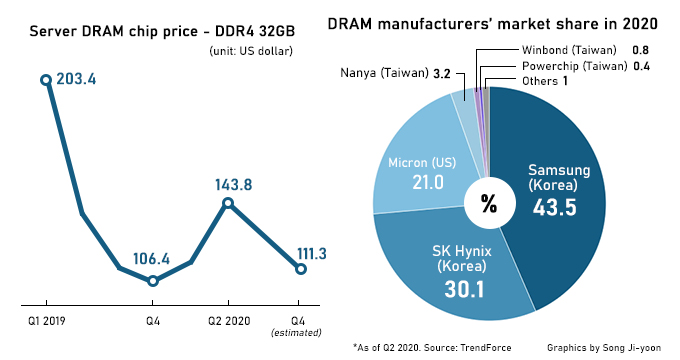 The general expectation among analysts is sever DRAM demand would start to pick up after the fourth quarter. The server DRAM inventory level at data center operators in North America averages at around six to eight weeks this month, relatively high compared to regular four to five weeks, but the inventory level is expected to normalize starting the first quarter 2021, said an industry official.