The company in a regulatory filing on Thursday said its operating profit for the second quarter ended June 30 came to 230.6 billion won ($194 million), up 4.1 percent from previous quarter and 79.7 percent from a year earlier.

Revenue totaled 1.9 trillion won, a record quarterly high. It was up 9.8 percent on quarter and 16.7 percent on year.

Naver shares closed Thursday 0.68 percent higher at 294,000 won. Naver has ascended to No. 3 on Kospi in market capitalization.

The company scored high all across the board from its main internet business, thanks to e-commerce activity, to fledgling financial and cloud services.

Business platform Line Works gained traction from remote working, Naver CEO Han Seong-sook said in a conference call following earnings release. The service has been adopted in various sectors, and the number of global users has doubled, she said. 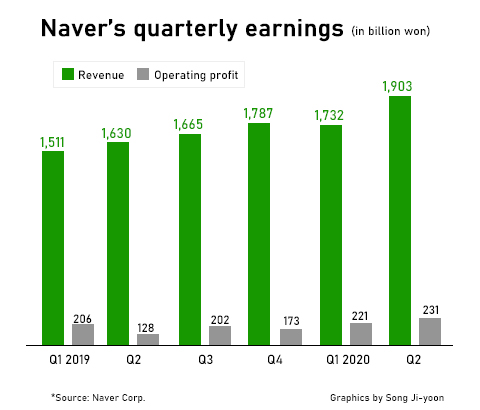 이미지 확대
Its main business platform business delivered 777.2 billion won in revenue, up 3.7 percent from the previous quarter and 8.6 percent from a year earlier, on growth in online store transactions from robust online shopping demand. Its subscription-based shopping service Naver Plus Membership launched in June also made solid contribution.

Naver’s messenger app Line and other platforms delivered 690.8 billion won in revenue, up 8.8 percent on quarter and 16.7 percent on year.