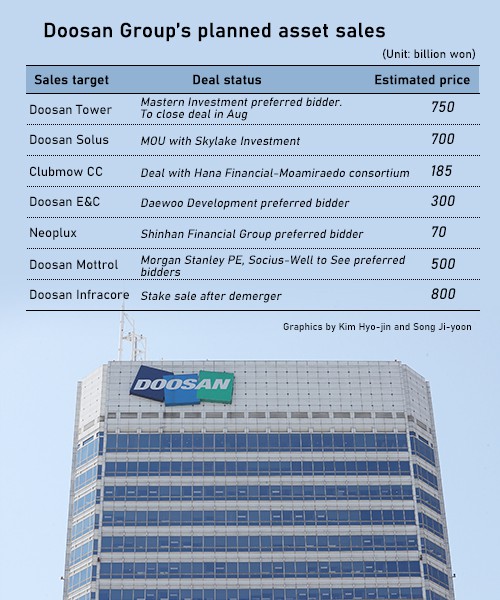 이미지 확대
South Korea’s Doosan Group is on track to meet the fund-raising requirements for the $3 billion state bailout of its flagship unit Doosan Heavy Industries & Construction Co., proceeding with its asset sales without major hitches.

A local consortium led by Socius-Well to Sea Investment and the U.S. Morgan Stanley Private Equity were shortlisted for a controlling stake in Doosan Mottrol Co, the group’s construction and defense equipment unit, according to industry sources on Tuesday.

They are said to have matched the 500 billion won ($417.7 million) sought by Doosan, according to the sources.

Socius-Well to Sea Investment in 2018 had received regulatory approval for its buyout of Doosan Engine, another Doosan unit in the defense category. It had paid 82.2 billion won for a 42.66 percent stake in the engine company. A sale to Morgan Stanley PE is also likely to pass given South Korea’s security alliance with the U.S., according to experts.

Doosan Mottrol, a maker of oil pressure machines and military equipment, was responsible for 3.1 percent of Doosan Group’s total sales last year. Its assets in 2019 totaled 345 billion won, with an operating profit of 38.9 billion won and sales of 562.7 billion won.

Doosan Group also selected Shinhan Financial Group as the top candidate to buy Neoplux. The price for Doosan’s 96.77 percent stake in the venture capital firm plus management rights is estimated at 70 billion won.

Sales of other Doosan assets are also coming to a close.

The group is in final talks with Mastern Investment Management to sell Doosan Tower building in Dongdaemun, Seoul for about 750 billion won.

After months of negotiations, it signed a deal earlier this month with Skylake Investment, a local private equity firm, to sell Doosan Solus, a maker of electric vehicle battery materials.

It also kicked off the tender for another key unit Doosan Infracore Co., Korea’s largest construction equipment maker, by sending out teaser letters to potential buyers.

Sales of all these units are expected to bring about 3.3 trillion won in proceeds to the cash-strapped conglomerate. Doosan Group had previously pledged to raise 3 trillion won in return for a 3.6-trillion-won state bailout to rescue Doosan Heavy Industries & Construction.