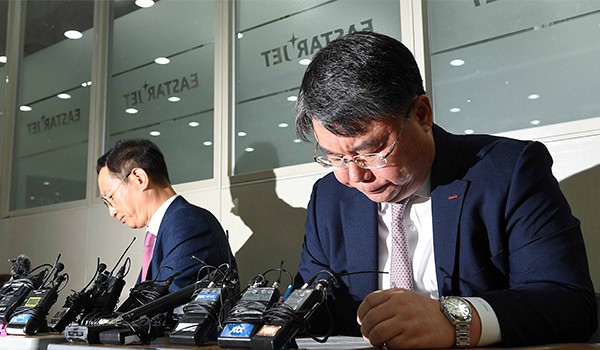 Founding family members of Eastar Jet Co. will give up their stock ownership, hoping their determination can facilitate Jeju Air Co.’s takeover process of the cash-strapped budget airline that has been at a stalemate after the COVID-19 pandemic has devastated the global aviation industry.

“We [founding family members] will contribute all of our shares in Eastar Jet owned via Eastar Holdings to the company,” Lee Sang-jik, founder of Eastar Jet who is also a member of the ruling Democratic Party, was quoted as saying in a letter read out by the company’s head of management on Monday.

“[Eastar Jet] took a big hit from the Korea-Japan route closures due to the soured relations between the two nations last year, and the business conditions have aggravated by the coronavirus outbreak this year,” Lee said. “[The carrier] has been seeking a breakthrough after Jeju Air proposed the buyout deal in September but [the process] has hit a snag.”

The delayed acquisition by Jeju Air has caused indiscriminate rumors regarding the legitimacy of share purchases by Eastar Jet by the owner family members, posing a big threat to the carrier’s survival, said Lee, hoping the surrender of their stakes in the budget airline can spur the takeover by its bigger rival.

Eastar Jet was founded by Lee in 2007, and Eastar Holdings was established in 2013. The holding company is the largest stakeholder of the carrier and is fully owned by Lee’s two children – a 33.3 percent stake by Lee’s 31-year-old daughter Lee Su-ji and the rest held by his 21-year-old son Lee Won-jun. Eastar Holdings purchased 68 percent stakes in Eastar Jet for around 10 billion won ($8.3 million) less than a year after its establishment.

The latest decision was made after Eastar Jet’s ad-hoc shareholders’ meeting last week could not vote on the agenda on board reorganization and changes to corporate article to increase the number of outstanding shares from 100 billion to 150 million because Jeju Air refused to name new board members as the next owner, making the outlook of Jeju Air’s buyout of the smaller rival murkier.

Jeju Air signed a preliminary agreement to buy Eastar Jet at 54.5 billion won in December under terms that the deal should close on June 29. Jeju Air, however, has turned less enthusiastic about the deal after COVID-19 has taken a big toll on the travel industry and has been delaying its finay decision.

In particular, the two budget airlines have been disagreeing on whether the next owner should shoulder the burden before the final deal.

Eastar Jet has been struggling with overdue wages mounting to 25 billion won as of June and asked Jeju Air for help but its request was turned down in the end.

“We sincerely urge Jeju Air to express clear intention on the acquisition within a day or two,” he said.