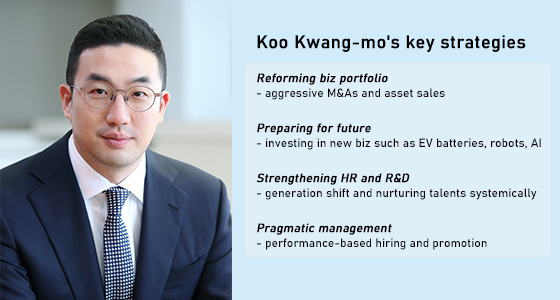 이미지 확대
LG Group chairman Koo Kwang-mo, who celebrated his second year at the group’s helm, is expected to keep focusing on reorganizing business portfolio to prepare for mid- to long-term growth.

Koo has been leading a groupwide reform by focusing on retaining talents and strengthening research capacity to lay the groundwork for long-term growth over the past two years. Sources from the business circles expect he would continue to stick to a selection and concentration strategy by investing in technologies such as artificial intelligence, robot and big data while maintaining competitiveness of the group’s core businesses.

Since taking over the leadership position on June 29, 2018 after the death of his father and former chairman Koo Bon-moo, he boldly decided to sell off several non-core assets to shore up financial ammunition with cash and cashable assets reaching an estimated 16 trillion won ($13.3 billion) as of the end of the first quarter. The group sold Beijing Twin Tower for 1.37 trillion won, IT service unit LG CNS for 1 trillion won and in-house maintenance unit LG Serveone for 600 billion won. It also disposed of LG Electronics’ water treatment subsidiary for 250 billion won, LG Chem’s LCD business for 1.3 trillion won and LG Uplus’ digital payment business for 300 billion won.

Koo has been spearheading LG Group’s digital transformation efforts while focusing on nurturing future growth engines such as electric car batteries, organic light-emitting diode (OLED) and robots. At the same time, he has been aggressively bumping up R&D and investment in human resources by promoting more than 100 employees as executives in two reshuffles and giving systemic training for 100 senior executives.