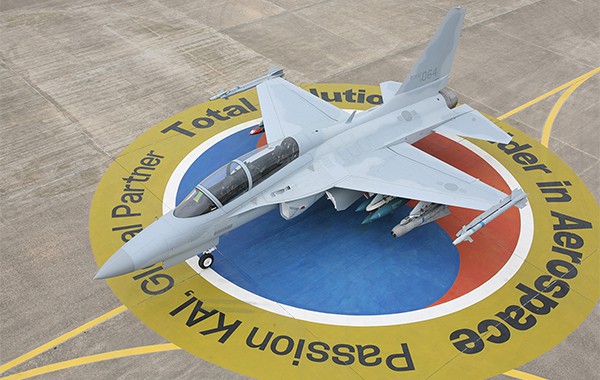 South Korea’s sole military aircraft manufacturer Korea Aerospace Industries Ltd. (KAI) is expected to supply 20 units of TA-50 trainer jets to the South Korean Air Force for estimated 700 billion won ($579.8 million), an order that can brighten up its earnings outlook for the year.

The Defense Acquisition Program Administration (DAPA) will confirm the consignment of about 20 units of TA-50 trainer jets at an estimated cost of 700 billion won on Friday, industry sources said Wednesday.

The DAPA last year announced its plan to add 20 TA-50 trainer jets to the air force fleet by 2024.

TA-50 is a renovated version of the T-50 trainer jet with enhancement in radar and weapons.

The military, currently with a fleet of 22 TA-50 units, decided the addition to fill the vacuum left by some KF-16 fighter jets which had been used for training but recently were assigned to fighting mission exclusively in replacement of aged F-5.

According to financial industry sources, KAI also is poised to sign a 1.3 trillion won manufacturing contract for 60 units of multi-role utility helicopter KUH-1 or Surion with the Korean army in the fourth quarter of the year.

The government procurement will help the company’s rebound after it has suffered from dwindling orders in recent years.

Industry insiders also expected the company to ink the delayed aircraft parts supply deal for Boeing’s 787 within this year for an estimated 430 billion won. The U.S. aircraft manufacturer also announced to resume the production of 737 Max in the third quarter and ramp up its output to 31 units a month by next year, which is another upside for KAI, said Lee Bong-jin, an analyst at Hanwha Investment & Securities.