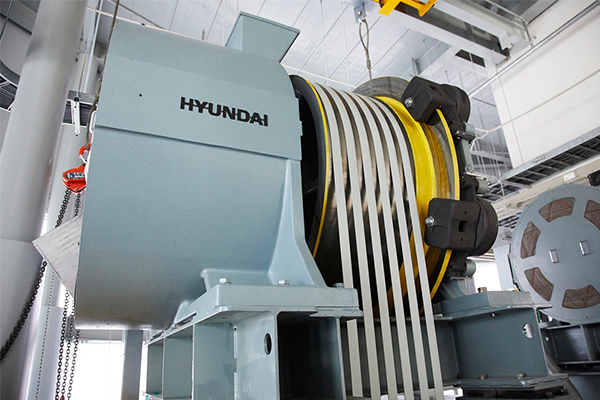 South Korea’s Hyundai Elevator announced Thursday it has developed the world’s fastest elevator that can travel at a speed of 76 kilometers per hour by replacing steel ropes with lighter carbon fiber belts.

The elevator using carbon fiber belts is capable of traveling from the bottom to the top floor of the world’s tallest building Dubai’s 828-meter Burj Khalifa in just 46 seconds, 20 percent faster than the current, the Korean company claimed.

The key technology for such a superfast speed is a carbon fiber belt with an 83 percent lighter weight than a steel rope generally used in elevators. The lightness helps lengthen the travel distance to 1,000 meters in height from earlier 600 meters and also reduce the power usage by 30 percent, according to the company.

On top of its high thermal resistance and tensile strength, the belt is coated with polymer materials to improve the durability and double the lifespan.

The motor system makes it possible for the elevator applied with carbon fiber belts to operate as usual with some malfunctions, and the design helps reduce the air resistance and deliver a comfortable and safe ride, said the company.

Hyundai Elevator plans to install the new elevator system in its new test center to be built in Chungju, North Chungcheong Province of Korea, in 2022, which is expected to become the tallest test tower for elevators in the world.

The company has spent nearly five years to come up with the latest elevator belt system, it said.