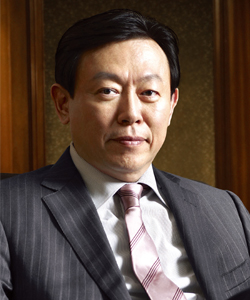 이미지 확대
South Korea’s fifth-largest conglomerate Lotte Group reaffirmed its commitment to seek new growth engines through M&As as its hospitality and retail businesses are heavily impacted by the pandemic.

Lotte Group Chairman Shin Dong-bin, in a meeting on Tuesday with chief executives of group affiliates, stressed the importance of identifying new businesses for growth with the changes of the times.

“Life won’t be the same after COVID-19. We must be ready for an entirely new set of market rules,” Shin was quoted as saying. “We need to study market trends and our business potentials while focusing investment on new engines of growth.”

Shin is said to be keen on advancing the global footprint of Lotte’s chemical operations. In an interview with Japan’s Nikkei newspaper in March, he expressed strong interest in Japanese chemical firms, saying Lotte is on the lookout for promising companies after losing out on the deal to buy Hitachi Chemical.

Lotte already appears to be on the move. Lotte Chemical on Wednesday announced it spent 170 billion won ($138 million) for a 4.69 percent share in Showa Denko K.K., a Japanese maker of chemical products and industrial materials that outbid Lotte in the deal for Hitachi Chemical last year.

Shin, in the Nikkei interview, also shared his ambitions to expand Lotte’s hotel business beyond Korea. By acquiring more hotels abroad, he vowed to double the number of rooms across Lotte’s global hotel network to 30,000 over the next five years.

The retail-to-chemicals empire with a strong base in both Korea and Japan has a history of making aggressive bets during times of crises.

In 1999, in the wake of the Asian financial meltdown, Lotte acquired the Japanese convenience store chain Lawson. In 2003, when Korea was reeling from the aftermath of a credit card bust, it beefed up its chemical business by buying Hyundai Petrochemical and a year later, KP Chemical. At the height of the 2008 global financial crisis, it went on a three-year buying streak at home and abroad, snapping up 22 companies including Malaysia’s state-run petrochemical firm Titan Chemicals, Korea’s Doosan Liquor BG and GS Retail.