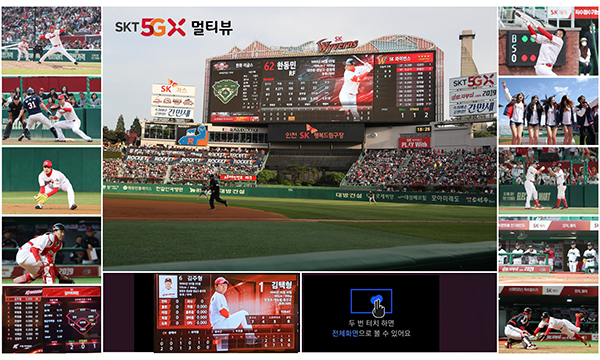 South Korea’s major league baseball has upped the 5G competition game for Korean wireless carriers that are out to impress viewers at home and abroad as most professional sports games have been suspended under the pandemic lockdown.

The program offers up to 12 angles, from the main screen to video shots of players and cheerleaders to close-ups of the pitcher and batter and detailed analysis of pitching and hitting moments. The service’s S-Tile technology enables viewers to freely move around the multiple videos on a single screen.

SK Telecom estimates 5GX mobile viewership to be about 20 percent higher than the broadcast TV audience.

KT has been airing the games using its own streaming service Seezn.

Viewers can watch the baseball games in high-definition video, chat with other fans in real time and look up batting stats. Following the latest update, they can now watch up to five different games at the same time.

According to KT, the number of pro league baseball viewers climbed 12.5 percent compared with the previous year.

LG Uplus has beefed up contents on its own baseball game streaming service, U+ Pro Baseball.

It added a live chat feature for fans, bolstered its video section by offering views by player position, and introduced a new game that allows people to predict the game results and rack up monthly points.

U+ Pro Baseball’s unique visitor count jumped 17 percent from the previous year before the start of the season and is now up by 20 percent, LG Uplus said.

Korean baseball has been drawing new fans in the United States as it has been one of the few professional sporting leagues to offer live games while much of the world remained under lockdown.

Korea’s major baseball league started its season on May 5 after the pandemic pushed back the games by more than a month. It is the second pro baseball league to resume games after the Chinese Professional Baseball League in Taiwan.