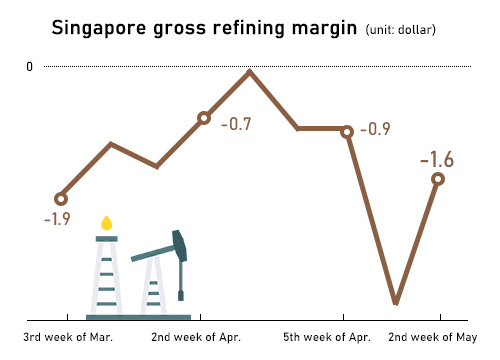 이미지 확대
South Korean refiners who had incurred record loss in the first quarter cannot expect any better results in the following quarter despite improvement in global oil prices unless fuel demand for international travel picks up.

The Singapore gross refining margin, a benchmark of profitability for crude refiners, registered negative $1.6 per barrel in the second week of May, according to the industry sources on Tuesday. The refining margin has remained in the negative territory for the ninth week in a row, the longest period ever.

Korean refiners see $4 per barrel a break-even point and have been losing money since October last year. The margin worsened due to poor demand for jet and vessel fuel that largely makes money for refiners.

Domestic refiners suffered massive inventory loss in the first quarter this year as they were forced to sell refined products at cheaper prices. It typically takes about one month for Korean refiners to turn crude oil imported into refined oil products. If global oil prices drop during the period, local refiners end up selling refined products below crude prices.

But a minus refining margin would take a bigger toll than inventory loss on refiners, said an industry expert.

Considering that Korea’s major four refiners refine 2.5 million barrels of crude per day and it takes about a month to get raw oil shipped, they would need to have 62.5 million barrels kept in inventory for average 25 days. If the global oil price falls by $1 during the period, Korean refiners would lose about 65 billion won just for maintaining inventory.

This also means that they would add 1 trillion won in profit if the refining margin rises by $1 a year or vice versa.