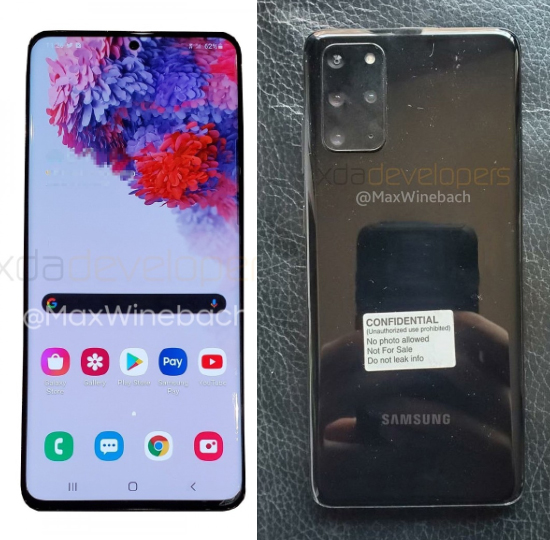 Online community XDA Developers on Monday published three photos of Samsung Electronics’ next flagship phone, claiming that it has received the images from a trusted source.

A shot of the boot screen showed the phone was titled as Samsung Galaxy S20+ 5G, suggesting that the 11th edition of Galaxy S series would be named S20, not S11 for its release in year 2020, as rumored.

The so-called Galaxy S20 is less curvy with smaller bezel compared to its predecessors, based on other leaked photos and information posted. Also, the phone has a rectangular camera module at the back, with four sensors inside, which is similar to the one fitted in the latest iPhone series. The phone is rumored to feature a 108-megapixel camera as well as a 12-megapixel ultrawide camera.

The new flagship model is scheduled to make its official debut at the unpack event in San Francisco, the U.S. on Feb. 11 (local time). The South Korean tech giant also hinted at showcasing the second version of its foldable phone released last year.

By Shin Chan-ok and Cho Jeehyun