이미지 확대
Hanjin Group chairman Cho Won-tae has managed to defend his management control from opposing front led by his own sister at least for a year, and its stock celebrated his win by hitting the daily limit on Friday.

The vote on extending his term on Hanjin KAL, the holding entity over flag carrier Korean Air Lines and other units under the transportation conglomerate, won 56.67 percent in yea and 43.27 percent in nay at the shareholders meeting on Friday that was much delayed due to wrangling over the vote process.

All of five outside board members including former Financial Services Commission chief Kim Seok-dong fielded by the management under Cho gained approval and none from the nominees from the opposition front were accepted.

Shares of Hanjin KAL closed Friday at their daily limit of 30 percent at 57,200 won ($47.23) as management stability finally returns at the conglomerate whose mainstay air business has been crippled by virus pandemic. 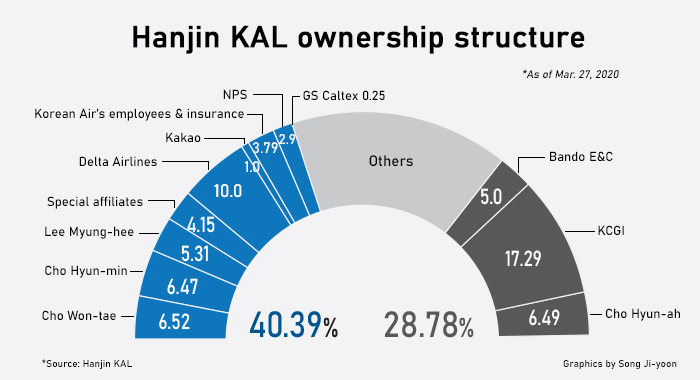 이미지 확대
Korean Air Lines shareholders separately on Friday endorsed the company’s proposal to change articles that can prevent parent Hanjin Group chair Cho Won-tae ending up losing board seat like his late father Cho Yang-ho when the extension of his own board term is put to vote next year.

The late Cho last year had lost seat at the managing board of the group’s flagship airliner even after gaining more than half of the vote due to the two-third vote rule. Cho died suddenly later in the year.