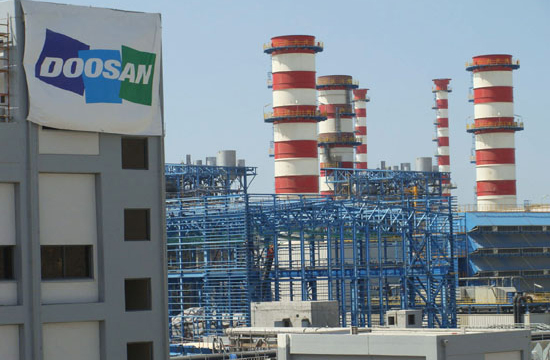 이미지 확대
South Korea’s Doosan Heavy Industries & Construction Co. with 1.28 trillion won ($1.05 billion) in debt due by the end of 2020 will receive emergency loan of 1 trillion won from state lenders and relief from immediate liquidity crunch.

The leading nuclear power plant equipment maker in a disclosure on Thursday said it held a board meeting to apply for a 1 trillion won loan from two state lenders – Korea Development Bank (KDB) and the Export-Import Bank of Korea (Eximbank). Its largest stakeholder Doosan Co. has supplied its shares and Doosan Tower headquarters building as collateral for the new funding.

The rescue funding was endorsed in a government meeting Friday addressing aid to big companies from 100 trillion won-budgeted coronavirus relief package. The two policy banks will shoulder half each of the 1 trillion won. The loan is separate from the rollover scheme for $500 million in overseas bonds the company is discussing with Eximbank. It has asked the bank to offer guarantee to the bond maturing in April in its conversion to general loan.

Doosan Heavy, once unrivalled nuclear reactor equipment provider, has been reporting losses after Korean government scrapped plans for new constructions of reactors to phase out of nuclear fuel.

Despite robust sales at affiliated units such as Doosan Bobcat and Doosan Infracore, the company incurred a net loss of over 100 billion won last year, extending the losing streak for six consecutive years. 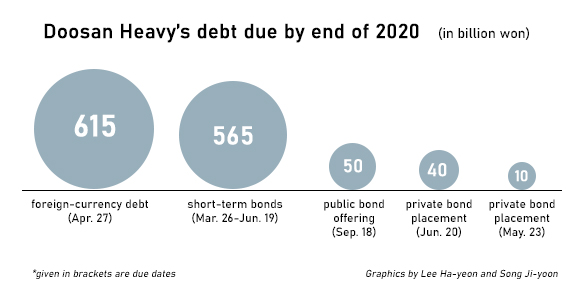 이미지 확대
Doosan Heavy has made various cost-saving efforts to improve its financial health amid rising debt. It raised capital through Doosan Mecatec from Doosan Co. last year and streamlined employees through early retirement program. It plans to propose furloughs to idled workers.

“Doosan Heavy has been struggling with cash shortages for a long period with a total of 5.9 trillion won in debt as of late last year, which is 12.2-fold heavier than its profitability,” said Seoul-based credit rating firm Korea Investors Service.