이미지 확대
The government must extend radical tax incentives on top of emergency funding to Korean enterprises to brace up for a global depression as the Korean automakers alone would suffer 90 percent sales drop in the worlds’ two largest auto markets of China and the United States, industry leaders said.

“The current coronavirus spread in the United States and Europe could cause a serious shock to the world economy to the level of a deep, worldwide financial recession,” warned Jung Man-ki, chairman of the Korea Automobile Manufacturers Association (KAMA), in his keynote speech at the second Industrial Development Forum held Wednesday in Seoul.

Government, business, and academic officials held a seminar to address the escalating fallout from coronavirus pandemic.

“Auto sales in the U.S. could be shriveled by up to 90 percent over the next three months. Korean makers turn out just 600,000 vehicles out of their full global output capacity of 5 million units due to chain shutdowns in India, the U.S., Europe and South America. Suppliers may not last for long if the situation continues,” Jung added.

In a survey by the association, 94.7 percent answered negative impact on the business as the result of the ongoing epidemic, said Kim Jun-kyu, a senior executive of the KAMA. The biggest hurdle was waning sales from subdued demand (91.5 percent), liquidity woes (36.6 percent), shortages in anti-viral products (32.4 percent), and unstable operation of overseas factories (11.3 percent.) 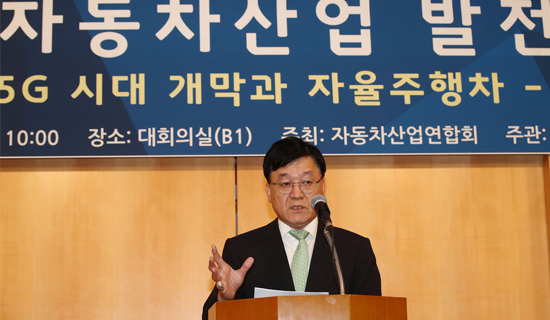 In response to the growing challenges, companies urged the government to expand financial aid and incentives, Kim explained. “If the U.S. and Europe benchmark Korea’s battle, the situation can be stabilized by June. We must be equally ready for sudden spike in demand,” he emphasized.

Others voiced concerns about the virus impact and the need for government supports.

“Delay in capital expenditure wrecks the facilities and parts makers’ profitability, leading to a fall in global competitiveness of them,” said Ahn Ki-hyun, a senior executive of Korea Semiconductor Industry Association.

To prevent chain bankruptcies of companies on weak demand, “the government must offer more emergency financial aids,” noted Jo Cheol, a researcher at the Korea Institute for Industrial Economic & Trade.

Union groups also joined the forum and called for government-led actions to protect the workers’ rights at a time of crisis.

As for Seoul’s announcement to double the virus relief package to 100 trillion won on Tuesday, Jung welcomed the decision, saying it is appropriate to aid Korean companies. He added that the support should be fair to firms regardless of the size, and further expansion could be needed like the U.S. and Europe to an extent to more than 10 percent of GDP in size, or 200 trillion won.