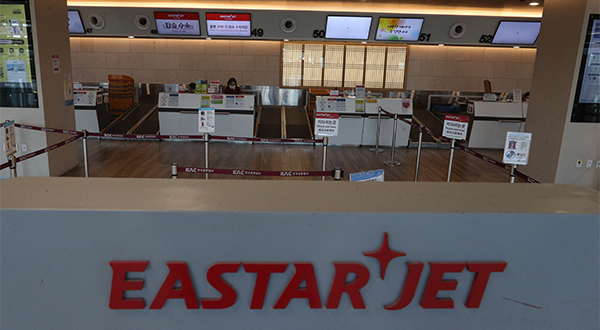 Budget carrier Easter Jet will streamline its fleet and staff, while full-service carrier Korean Air Lines shuts down Beijing route in latest woes of the Korean aviation industry that has been more or less pushed out of business from global pandemic.

According to industry sources on Monday, Eastar Jet is planning to return some of its aircrafts in lease contracts before the end of their contracts as it decided to suspend all the flight services for a month from March 24. It also is reviewing a redundancy program to let its employees go.

The company failed to make full salary payment this month for the second month in a row. Chief Executive Officer Choi Jong-gu in his letter to the employees said the company sought for emergency government support but could not afford the paycheck for employees this month. It paid only 40 percent of monthly wage to the employees last month.

Separately, Korean Air Lines announced that it would suspend the operation of flights from Incheon, Korea to Beijing, China for a month starting Monday as the Chinese government started to divert all international flights due to arrive in Beijing to other airports to stop the import of the virus.

The full-service carrier now operates only two routes to Chinese cities – one to Shanghai and the other to Shenyang.