이미지 확대
South Korea’s largest automaker Hyundai Motor now has only a quarter of its global operation open, underscoring the danger of the entire auto supply chain that makes up a key pillar of the Korean manufacturing power.

Hyundai Motor Group Monday has suspended production at its Hyundai Motor factory in Chennai, India for this month and is reviewing another shutdown of Kia Motor’s Andhra Pradesh plant in sync with local governments’ lockdown decisions to contain the new coronavirus spread.

The factory shutdown in India on the heels of similar actions in the U.S. and Europe more or less cripples the auto group’s overseas operation responsible for 75 percent of oversea revenue and output of 3.94 million units of finished vehicles.

Currently, the auto giant has only five out of its 20 factories overseas in Turkey, Russia, Mexico, Brazil and Vietnam operating normally.

The total market capitalization of the company’s stocks stood at 14.72 trillion won as of Monday, falling to the market No. 10 on the main Kospi. Its shares briefly touched an intraday 52-week low of 65,000 won last Friday, almost halved from the closing price of 110,500 won on March 6.

“The company is planning to cover the loss by ramping up output of popular models at home such as full-size SUV Palisade and premium brand Genesis’ first SUV model GV80. We’ll go all-out to improve the production efficiency and reduce the cost with innovative designs,” said an official at Hyundai Motor Group.

The troubles of the household automaker have menacing ripple effect on the entire automotive industry.

Last year’s auto output in Korea dropped to below 4 million units, and auto exports also are expected to plummet this year due to the virus impact. 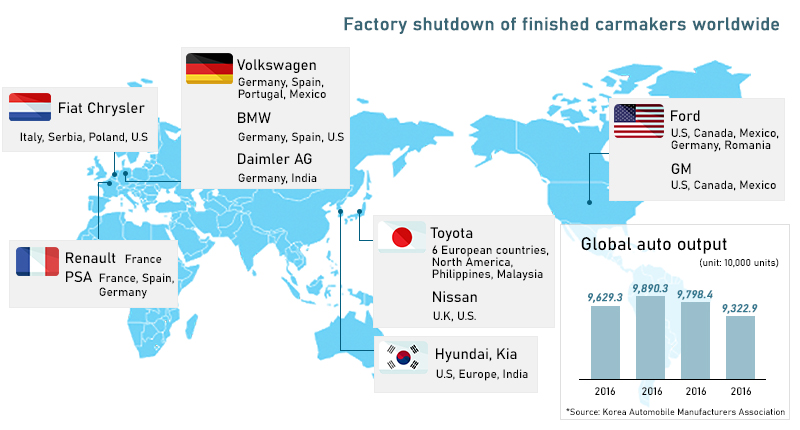 Global automakers are not safe from factory shutdown and output plunge, either, raising concerns about a serious dent in global auto output. Volkswagen AG has shut factories in Germany, Italy, Spain and Slovakia for two to three weeks, with Fiat Chrysler Automobiles NV and Peugeot maker PSA Group stopping almost all factories in Europe.

Japanese brands Toyota and Nissan also joined the move to close down all its plants in Europe and North America.

The world’s auto output last year totaled 93.23 million units, extending the losing streak for two consecutive years. Outlook for this year is dimmer, according to the market research firm IHS Markit, with global auto output estimated to decrease more than 1.44 million units compared to a year ago.

Output from Europe would be shriveled 880,000 units due to 13-day shutdown on average, and from North America down 480,000 units on shutdown for six days, it forecast. South American factories also would see an output decrease of more than 80,000 units.

Global credit ratings agency Moody’s Investors Service recently turned more negative about the auto business this year, with estimation that global auto sales this year would be down 2.5 percent on year due to the deadly pandemic. LMC Automotive also revised down its outlook for this year’s global auto sales to a 4.3 percent dip from previous 0 percent growth.

Morgan Stanley warned that auto sales in the U.S. could be shriveled by up to 90 percent on year in the next three months.

Markets now are calling for aggressive and fast government aids to help the auto industry, citing its size and potential impact to other sectors. U.S. automakers recently urged the U.S. government to delay the introduction of United States-Mexico-Canada Agreement (USMCA) and provide financial support for parts suppliers.

European manufacturers’ association also stressed the risk of losing 14 million jobs and demanded immediate help from the European Union and each government to ease the liquidity woe of the industry.

In Korea, auto parts makers pushed ahead with a temporary extension of workweek hours but failed to get an approval from local governments.