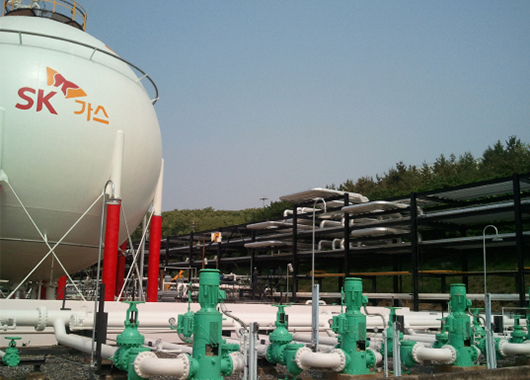 LPG, also referred to as propane, is used as a petrochemical feedstock to extract propylene, which is turned into polypropylene plastic used in various applications, including packaging and automotive parts. Petrochemical makers also produce propylene from naphtha separated from crude oil. Petrochemicals choose to use either LPG or naphtha depending on market conditions.

An industry expert said that it has become cheaper to produce propylene from LPG than naphtha in recent years amid softening in LPG gas price, and it is expected that demand for LPG as petrochemical feedstock would stay solid for a while.

SK Gas launched the propane dehydrogenation business for producing propylene from LPG in 2013 as part of business diversification efforts. In the following year, it set up petrochemical gas specialist SK Advanced, which started making 600,000 tons of propylene per year from propane in 2016. The propylene making unit has been growing rapidly, with its operating profit jumping to 99.1 billion won in 2018 from 66.7 billion won in 2016. Market experts believe SK Advanced earned record earnings last year.

In addition to the boon from the petrochemical industry, SK Gas anticipates growth in LPG demand as automotive fuel with a change in the law to allow private cars to run on LPG as part of the country’s efforts to reduce pollution. According to the Korea LPG Association, the number of registered LPG cars in the country reached 2.0 million units after marking the first increase since November 2010.